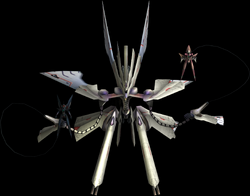 It serves as the last Omega boss when defeating Dmitri Yuriev and the post-transformed Omega. It virtually transforms into a powerful and formidable machine when Dmitri merges with it, along with the waveforms of U-DO that had infected him from his time of having direct contact with the entity.

After Dmitri/Ω Metempsychosis is defeated by Jr. and company, Albedo appears. The Zohar and Abel are extracted from Ω Metempsychosis and transported to Michtam (although the cutscene depicts Albedo doing this, a later cutscene implies "someone's will" did, likely Wilhelm).

Ω Metempsychosis remained within Abel's Ark, as Abel's Ark (or rather, the sealing of Abel's Ark) served as one of the instruments for Zarathustra and Eternal Recurrence.

Ω Metempsychosis, along with the Gnosis and Abel's Ark, vanish when chaos and Nephilim Verum send all things back to Lost Jerusalem in the region of space.

The name "Omega Metempsychosis" is translated as "Omega spirit transmigration".

The ultimate Omega configuration, a mutation that resulted from taking in the Zohar and completely reconstructing the Y-Data information. One of the relics of God.

The external transformation that occurred when it took in the Zohar stemmed from the self-transforming mechanism in the Omega waking up from its long sleep. It is thought that the Omega existed in a form similar to this configuration during the Lost Jerusalem era.

Abel has been built into the control device in the unit's core, due to the need for the higher-dimensional "power" flowing directly through the Zohar to be stabilized for dimensional space.

"[Omega] metempsychosis" can be translated as "Omega spirit transmigration."

Retrieved from "https://xenosaga.fandom.com/wiki/%CE%A9_Metempsychosis?oldid=48535"
Community content is available under CC-BY-SA unless otherwise noted.