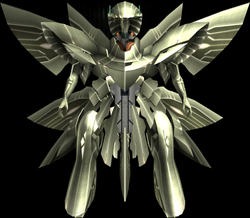 The Ω Res Novae is used as a Zohar Project anti-Gnosis trump card by the Galaxy Federation military in Episode III. It was rebuilt by Dmitri Yuriev and the Salvator Faction and his elite scientist, Sellers, after the events of Episode II. Ω Res Novae is piloted by the mysterious boy Abel (U-DO) and is worked on by Juli Mizrahi.

Because the original design for Proto Omega called for the use of the Original Zohar, Ω Res Novae is rather unstable when powered with the makeshift Zohar Emulator that Sellers created to advance testing of the Ω Res Novae.

Before being pressed into service, the machine is tested in a live-fire exercise against the Version-III KOS-MOS at the CAT Testing Ground at Fifth Jerusalem. While KOS-MOS is largely able to evade its attacks, she proves incapable of inflicting any real damage even with her X-Buster.

After absorbing the Original Zohar on Abel's Ark, Ω Res Novae transformed into a slender white mecha with blue and red highlights.

Ω Res Novae translated from Latin means "new things/affairs," a common idiom for revolution. Thus, it could be thought of as "Omega Revolution".

A unit based off Proto Omega, which was recovered during the fall of Miltia. Recreated and partially upgraded by Dmitri Yuriev as an anti-Immigrant Fleet weapon.

Although it does not house the Original Zohar itself, it uses Abel as its core module and an emulator as an auxiliary, making its power far greater than the original Proto Omega. The exterior itself is not greatly different. However since an emulator is being used in place of the Zohar at the core, functionality is unstable and at a lower power output.

"[Omega] Res Novae" can be translated as "Omega Revolution"

Dmitri Yuriev and Omega Res Novae.
Add a photo to this gallery
Retrieved from "https://xenosaga.fandom.com/wiki/%CE%A9_Res_Novae?oldid=49925"
Community content is available under CC-BY-SA unless otherwise noted.