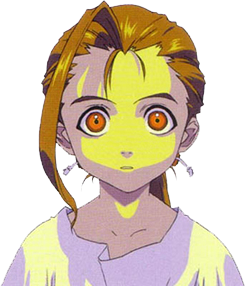 Abel is an important character in Xenogears.

When he was seven years old in T.C. 4767, Abel was on the Eldridge with his mother. However, Abel lost his mother and was searching for his missing mother. Abel came into contact with Zohar on the ship when he accidentally found a facility housing a Deus/Zohar connection experiment. Abel was searching for his mother when he made contact, and his desire to be with her imparted the Wave Existence with a mother's will when he made contact. It constructed a woman (Elehayym) using the biological computer Kadomony, a component of the Deus system, to be with Abel, but Deus transformed the woman into the original Myyah Hawwa. The Wave Existence gave Abel its power so one day he could destroy Zohar, which would free the Wave Existence to ascend back to a higher dimension.

After contacting the Zohar/Deus, it began to take over the ship and caused its crash. Of 1,200,000, Abel was the only human survivor of the Eldridge crash. Together with Elehayym, or Elly as he had come to call her, he lived during the first years of human life on the Xenogears planet.

In E.C. 0010, when Cain, Myyah and the Gazel Ministry began laying down the foundations of what would be all their various control mechanisms in the developing human culture, Abel and Elly, now grown adults stepped forward and challenged them. Abel, having known the real truth of the matter and being the only true human on the planet was able to see through Cain's lies and called him on them in front of the whole world.

In E.C. 0011, Cain began plotting to kill Abel. He responded by murdering Elly. At some point after, Abel was killed by Cain as well.

Both Abel and Elly were continuously reincarnated through the Zohar and the Wave Existence for thousands of years. It is unknown how many times Abel was reincarnated, but there are three known reincarnations.

In 6055, Abel was reincarnated as Kim Kasim in Zeboim.

In 9475, Abel was reincarnated as Lacan.

In 9981, Abel was reincarnated as Fei Fong Wong to Khan Wong and Karen Wong in Shevat. Fei is the last incarnation of Abel and the Contact who breaks Deus hold on humanity and frees the Wave Existence.

Abel and Elly fleeing from Cain in 0011.

Elly is killed by Cain and tells Abel to live.
Add a photo to this gallery
Retrieved from "https://xenosaga.fandom.com/wiki/Abel_(Xenogears)?oldid=56126"
Community content is available under CC-BY-SA unless otherwise noted.