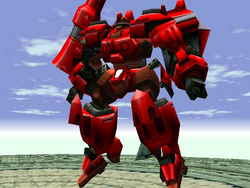 Achtzehn is a large Gear, taking the name of the German word for "Eighteen". It resembles Maria Balthasar's Gear, Seibzehn ("Seventeen") and Calamity in appearance, but sports a deep red and black color scheme and an enormous cannon on its right arm, which it connects to one of its backpack turbines for its signature attack. It also sports a jamming device capable of disabling nearby Gears. Achtzehn, like Seibzehn, is a Gear capable of operating independently of a pilot due to inbuilt neural circuitry, the discovery of the persona of which is a significant plot event for Maria.

Retrieved from "https://xenosaga.fandom.com/wiki/Achtzehn?oldid=47182"
Community content is available under CC-BY-SA unless otherwise noted.