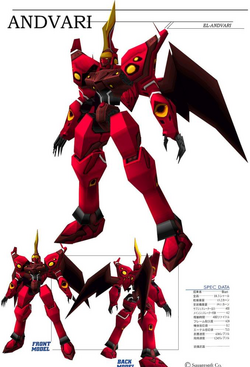 Andvari is Bart's Omnigear and the treasure of the Fatima royal family.

A tall, bright red Gear with a large yellow horn and small black wings that was piloted over 500 years ago by Roni Fatima, the first king and founder of Aveh. After the Shevat-Solaris War, Roni sealed the Omnigear away inside of Ft. Jasper, which was then hidden in the Nisan mausoleum. A legend was then passed down through the Fatima Dynasty that if ever Aveh or Nisan were in peril then Roni's descendants could unlock the treasure wake the Omnigear from its slumber to save either nation.

Such a time came 500 years later when Roni's descendant Bart Fatima unlocked the Omnigear and claimed it for his own in order to fight back against Solaris, who had put the whole world in jeopardy, not just Aveh. Andvari is the first Omnigear that Fei Fong Wong's party obtains. Andvari is aligned with the Anima Relic Dan.

Like its predecessor Brigandier, Andvari can whiplashes its opponents with one or two whips and can cause status ailments and changing elements when it use Ether magic. But is not able to counterattack unlike Bladegash.

Andvari's attacks were increased when it unleashes its moves and has a high durability. His moves are like its predecessor Brigandier and regains its infinite deathblows. Like Xenogears, some of its deathblows are renamed but one.

Concept art
Add a photo to this gallery
Retrieved from "https://xenosaga.fandom.com/wiki/Andvari?oldid=50858"
Community content is available under CC-BY-SA unless otherwise noted.