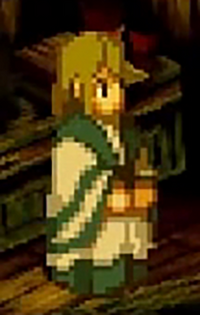 Anne, full name possibly Anne Banderas, was either the wife or lover of Kaiser Sigmund. Anne is the deceased mother of Ricardo Banderas.

The extent of Anne's relationship to Kaiser Sigmund and what (if any) position or influence she held is unknown, although it can be assumed that she had a fairly comfortable life due to the fact that she was carrying his heir.

Upon becoming pregnant with the Kaiser's child, Anne and her unborn child became the target of the scorned Ethos. As payback to the Kaiser for driving them out of Kislev, Ethos doctors genetically altered her child in utero so that it would have much more overt demi-human features than that of his father, who looked almost completely and was accepted as such by his subjects.

After Rico's birth, Anne and Rico were banished, and the Ethos lied to Sigmund, telling him that Anne and his son died.

As Rico grew up, his already obvious demi-human features became even more pronounced, resulting in other children tormenting him, much to his mother's dismay. If that weren't enough, the Ethos doctors continued to target Anne even after her banishment.

Eventually, she developed a wasting illness. It is unclear whether the Ethos doctors caused this illness, or simply made it worse through lack of proper treatment, but it eventually claimed her life, leaving Rico orphaned.

Retrieved from "https://xenosaga.fandom.com/wiki/Anne?oldid=49588"
Community content is available under CC-BY-SA unless otherwise noted.