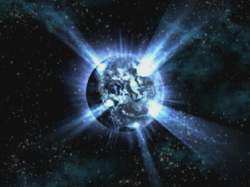 The planet Ariadne in the process of Gnosifying, in which it becomes the Cathedral Ship, from Episode I.
Region
Unknown
Sector
Unknown
System
Unknown
Diameter
Unknown
Gravity
Unknown

Ariadne was a sprawling planet with a population of around 1.5 billion (1,500,000,000) humans and home to a Zohar research facility, as well as one of the Zohar Emulators. It is implied Ariadne is slightly bigger than Lost Jerusalem because of the km diameter of the Cathedral Ship.

Ariadne is divided into three sections: a zone filled with greenery, a zone surging with businesses and research facilities, and a living space for regular citizens.

The business zone housed the headquarters of a company which focused on the artificial plant industry, such as Green Plant Company. The planet's green zone was dominated by the artificial plants of the business, and new types of flowers, among other items, were sold to the citizens of the main planets. The "Ariadne Flower," with its unique blue petals, was an especially popular product.

Eventually, two years later, a Zohar Link Experiment with the Zohar Emulators, carried out in this facility under Andrew Cherenkov's command, caused a space-time anomaly that annihilated planet Ariadne, turning it into a Gnosis called the Cathedral Ship. This event was later referred to as the "disappearance of planet Ariadne", the Ariadne Incident.

Ariadne, in Greek mythology, was the Cretan princess who betrayed her father, King Minos, by helping Theseus escape the labyrinth of the Minotaur.

Ariadne full of corpses.
Add a photo to this gallery
Retrieved from "https://xenosaga.fandom.com/wiki/Ariadne?oldid=56611"
Community content is available under CC-BY-SA unless otherwise noted.