Xenosaga Wiki
Register
Don't have an account?
Sign In
in: Characters, Episode I characters, Female characters,
and 2 more 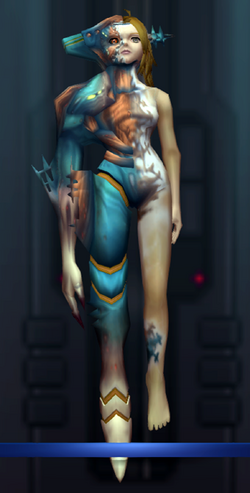 Betty is the name that Jr. gives to the one of the transformed bodies laid to rest on the Durandal, whose remains have halfway turned into a Gnosis. After finding a monogrammed "B" among her belongings[1], Jr. named her "Betty" because he doesn't feel it is right to refer to the dead by codenames or numbers, or to treat them like objects. This perspective likely stems from his childhood at the Yuriev Institute, where he was addressed as U.R.T.V. unit 666.

Betty was a little girl when they first found her. Her name when she was alive is unknown.

In Xenosaga Episode I: Der Wille zur Macht, Jr. shows Shion Uzuki and her group Betty. Shion is rather horrified because she was touched by a Gnosis earlier on the Woglinde, and wonders if she will have a similar fate to Betty.

Betty in the anime.

Betty in the manga adaptation.

Community content is available under CC-BY-SA unless otherwise noted.