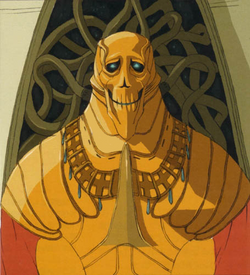 Emperor Cain is a decoy antagonist in Xenogears. Cain's mind was always focused on protecting humanity until the time of "the Gospel" when Deus would be revived using all of humanity as spare parts. However, at some point, he secretly desired an age where humanity was freed from the fate Deus laid down for them.[1]

Cain was known as the first human to be born on the planet along with the Gazel Ministry via Kadomony. He was pre-programmed from creation to carry out the will of Deus and constantly work towards Deus' revival.

In 0010, Cain began to be worshiped as the advent of God among the people. Abel and Elehayym, now lovers, rebelled against this worship, becoming a hindrance to Cain.

In 0011, Cain killed Abel and Elehayym to silence them from spreading rebellion. However. the murder plagued his conscience and because of it, he developed a guilt-driven sympathy for normal surface dwelling Humans, in effect breaking free of his programming to a degree.

Cain lived for thousands of years after. The reason is because Cain is the leader of the original Animus.

After the Shevat-Solaris War, in 9506, Cain reached out and contacted Karellen and Myyah at the Ministry's urging. They saw Karellen as a key asset in their grand plan so Cain came to Karellen and offered to help him achieve his goals if he would help them achieve theirs. Karellen agreed and he forged an alliance of mutual dependence with one another.

However, while Cain was sincere about coming to Karellen for his help to save his "children", the Ministry was not. As payment for his help, Karellen performed an extensive procedure on Cain in order to extend his life indefinitely. Cain's coffin-like suit, mask, throne, and a good portion of the Imperial Palace in Etrenank was used to just keep him alive.

In 9164, Cain and the others determined that humanity has reached the final level. Solaris was founded and Cain served as the Emperor of Solaris and the de factor ruler of all life on the planet. Cain became worshiped among people.

Cain was once a strong ally of Myyah and the Gazel Ministry, though his actions over the many years caused a split between the Emperor, Myyah and the Ministry. Cain was concerned for the general well-being of all life while the Gazel were only interested in themselves and Myyah was only concerned about Deus.

In 9975, Cain allowed his DNA to be used by Karellen to create Ramsus, an artificial Contact and a clone of Cain.

Cain originally sent Citan Uzuki to the surface in order to keep a constant vigil on Fei Fong Wong, the actual Contact after he was brought to Lahan by Wiseman. Cain and Citan communicate via a telepathic link several times over the course of the game and Citan keeps the Emperor abreast of all the recent things happening around Fei and his group.

Cain was assassinated by Kahran Ramsus. Ramsus was manipulated into doing so by Myyah and Karellen at the behest of the ministry.

Cain was against the usage of the Gaetia Key, so Cain's death allowed the Gazel Ministry to use it. This turned the better majority of the world's population into Wels causing Mahanon, the main hull of the Eldridge, from the ocean floor to raise.

Abel and Elly fleeing from Cain.

Elly is killed by Cain and tells Abel to live.
Add a photo to this gallery
Retrieved from "https://xenosaga.fandom.com/wiki/Cain?oldid=56708"
Community content is available under CC-BY-SA unless otherwise noted.