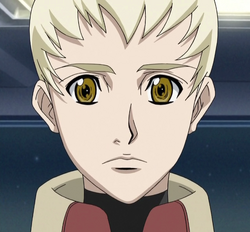 Calx was a Federation Combat Realian manufactured by Vector Industries who died during the Gnosis attack on the Woglinde.

Calx defends Shion Uzuki from Luis Virgil. He later dies during the Gnosis attack by being shot repeatedly with a gattling gun from Virgil's A.G.W.S.

Calx in Xenosaga: The Animation.

Shion's final moment with Calx. "Remember what we were made for!"

Shion's final moment with Calx. "This is what we were born to do."

Calx screams in pain as he is shot by a gattling gun.

Calx sacrifices his life and dies to protect Shion.

Calx bleeding to death on the floor.
Add a photo to this gallery
Retrieved from "https://xenosaga.fandom.com/wiki/Calx?oldid=49260"
Community content is available under CC-BY-SA unless otherwise noted.