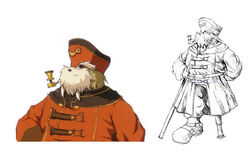 The odobenidae demi-human, The Captain of the Thames, a large city-on-a-ship, was known primarily by his title. He rescued Elehayym Van Houten and Fei Fong Wong after their ship, the Goliath, was shot down over the Aquvy region. His helmsman is a delphinine demi-human named Hans.

He looks like a humanoid walrus in a naval uniform and frequently smokes a large pipe. He is known for his "Men of the Sea" code that he lives by, which is somewhat similar to bushido. When Deus' awakening caused the Thames to sink, the Captain supposedly went down with the ship. However, he soon reappears in the ruins of Shevat.

When he meets Bart, they both become fast friends, for their appreciation of sea travel. When challenged in battle he has a fondness for using an ancient salvaged cannon, he dubbed "The Big Gun" which, on Hans' account, is actually rather ineffectual. He and his crew manage to fend off his ship from an attack by Solarian Wels. He was also more then generous enough to help Fei and his friends get their Gears fitted with deep diving equipment. The Thames was later destroyed by the Seraph Angels by the late events of the second disc. Though both Captain and Hans survived and traveled to Shevat where Hans married and had step-children. At this point, he mentions a new island discovered, as a result of Solaris' global cloaking shield having worn off, called Duneman Isle, to elatedly search for more treasure. Unfortunately this goal would seem beyond his reach without a ship. Yet he's not given up hope.

He prides himself on being a real "man of the sea." A form of comic relief is provided with him facing the camera on three different angles, annunciating three individual phrases. This eccentric and yet rather altruistic and bold demeanor makes him very popular with children, as well as less mature individuals, such as the case of Bart. Nonetheless, he is charismatic and well respected by his crew.

Retrieved from "https://xenosaga.fandom.com/wiki/Captain?oldid=46032"
Community content is available under CC-BY-SA unless otherwise noted.