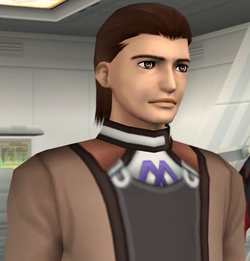 Lieutenant Caspase is a Captain in the Galaxy Federation Army's Marine Corps.

In the Realian adjustment room on-board the cruiser Woglinde, he performed tasks such as regulation and input of the tactical algorithms of the combat Realians which had been assigned to the same ship. Incidentally, he attended the military academy at the same time as Luis Virgil.

Caspase was killed in the Gnosis attack on the Woglinde.

Retrieved from "https://xenosaga.fandom.com/wiki/Caspase?oldid=39646"
Community content is available under CC-BY-SA unless otherwise noted.