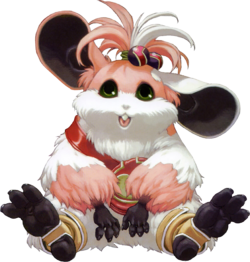 Chu-Chu is a playable character in Xenogears. Once mistaken by Bart as a stuffed animal, Chu-Chu was with Marguerite Fatima during her imprisonment in Fatima Castle.

The player has the ability to re-name Chu-Chu upon meeting her.

Chu-Chu was part of the Ooki tribe, an aboriginal species of the world. Her race, the Dotesque Chu-Chupolin, once lived in the woods, but due to Solaris's activities, they became almost extinct. It is implied Solaris did cruel experiments on the Chu-Chus. The Chu-Chus once had gigantic bodies, but Solaris put genetic Limiters in them to keep them at a small size.

Some managed to escape to Shevat and live with Wiseman, but she was taken to the surface by him years before the game starts. Chu-Chu disguised herself as a stuffed animal.

Chu-Chu snuck into Bledavik, Aveh, disguised as a stuffed animal. In the shopping center of the town, Margie saw Chu-Chu disguised as a stuffed animal. Margie wanted Chu-Chu so much that she took Chu-Chu with her, but unfortunately, along the way, Margie was slowed down by Chu-Chu's weight and caught by a subordinate of Shakhan. Shakhan recaptured her.

She has romantic interest for Fei Fong Wong, but no one really notices and it spooked Fei at first.

Chu-Chu can grow to the size of a Gear once the physical part of the limiter is removed, which she does to protect Shevat from Achtzehn. While she loses the battle, her dedication triggers Maria Balthasar's will to fight against her father. Both join the party afterwards.

Chu-Chu is one of the two characters that have no Deathblows and some unique mechanics. Her Attack and Ether base stats are increased by 100% while in battle, although the spell Forest Dance still uses the normal value.

She also has no Gear and instead grows, although she doesn't have the options Booster and Special Options and uses no Fuel, not to mention that she also can't equip an Engine, a Frame or any Gear accessories. Her stats in giant form are based directly on those of her normal form, and she is the only character capable of healing Gears.

Early concept.
Add a photo to this gallery
Retrieved from "https://xenosaga.fandom.com/wiki/Chu-Chu?oldid=51611"
Community content is available under CC-BY-SA unless otherwise noted.