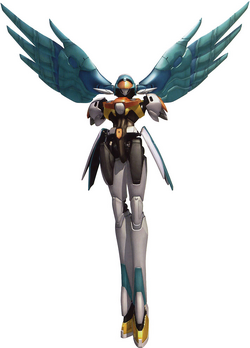 Crescens is a thin white and gold Gear with no arms and large green angel wings on its head. The Gear was constructed by Solaris to be used exclusively by Emeralda Kasim. Similar to its pilot, it is made at least partially out of nanomachines.

The Gear makes its first appearance at the Sargasso Gate when Karellen, having harvested enough of Emeralda's nanomachines to suit his purposes, turned her loose on Fei Fong Wong and his friends in the hopes that they would dispose of her for them or vice-versa. After Crescens was defeated the brainwashing performed on Emeralda wore off and she then joined Fei's party in their quest to stop Karellen.

In battle, Crescens is one of the fastest Gears with high accuracy, but like Elly's Vierge this is offset by poor framework.

Unlike its pilot Emeralda in both her child and teen forms, Crescens' fighting style relies on its angel wing-like spikes on her head and can kick her opponents at the same time when she unleashes her deathblows.

Add a photo to this gallery
Retrieved from "https://xenosaga.fandom.com/wiki/Crescens?oldid=50898"
Community content is available under CC-BY-SA unless otherwise noted.