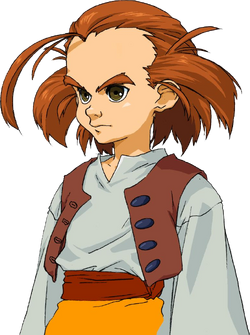 Dan is a mischievous young boy who lived in Lahan Village.

When his older sister, Alice, dies in the Lahan incident, he blames it on Fei Fong Wong.

From that day forward, Dan becomes Fei's rival, challenging him at the Aveh tournament. Dan also has Alice's wedding dress, which he may give to Fei during the tournament, should the player choose not to not attack Dan throughout the battle for 10 turns. His motivation for Fei to have it is to constantly remind him of what he did to Alice, although it does have a positive use.

Once the truth behind Fei's Id form is revealed, Dan forgives him.

Dan blames Alice's death on Fei.
Add a photo to this gallery
Retrieved from "https://xenosaga.fandom.com/wiki/Dan?oldid=47882"
Community content is available under CC-BY-SA unless otherwise noted.