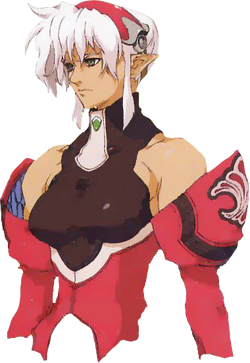 Dominia Yizkor is a demi-human, one of the only survivors of the nation of Elru, destroyed by Id six years prior to the start of Xenogears. She has a rather aggressive personality.

She was taken in by Kahran Ramsus, who was also at Elru when Id made his attack, and he pushed Karellen to enroll her at Solaris' Jugend Military Academy, where she became one of the Neo-Elements. She was saved from being processed in the Soylent System by Karellen and made into an Element, an elite Solarian super soldier.

She is the Earth Element. She has something of a crush on Ramsus and a strong rivalry with Elehayym Van Houten, Kelvena and Myyah Hawwa. Dominia's pointy ears and muscular physique betray her status as a demi-human. She is one of the last, if not the last survivor of the nation of Elru with Kaiser Sigmund, the ruler of Kislev. Due to being sided with Solaris and being fed their propaganda, she harbors a strong dislike for Lambs, despite that she was once one and grew up with them.

Dominia has the ability to harness and make use of her emotions, namely feelings like anger, jealousy, desire, fear, rage, and other base emotions, in order to amplify her existing strength (and likely earth ether as well). Like Ramsus and his inferiority complex towards Fei Fong Wong, Dominia also has an inferiority complex towards Elly. She's a very physical sort of warrior, though, and she rarely uses her mental power, aside from the amplification technique mentioned here.

Dominia pilots the humanoid gear Bladegash, which combines with the other three Element gears to form the massive G-Elements.

Dominia is responsible for piloting the Hecht on a suicide mission to Nortune, the capital of the Kislev Empire under heavy escort. The mission was to ram the ship into the power-generation grid in Nortune's C-Block which would create a massive explosion intended to destroy part of the city and leave the rest unpowered and unprotected. The Hecht is intercepted over Nortune by Fei, Elly and Rico after an intense aerial battle. They try to divert its course and steer it away from any vital targets but are only moderately successful. The Hecht is diverted away from the city's power grid but it cannot be steered away entirely from striking the city. It slams into a residential section of the city instead, but the rest of Nortune survived the attack. It is never explained how Dominia survived the destruction of this supposedly suicide weapon.

Later, despite their combined powers, Dominia and the others are defeated by Fei and his group.

Dominia appears in Merkava to convince Ramsus who pilots Karellen's Omnigear to stop him from fighting Fei while she pilots her gear Bladegash.

Her last appearance in the game is when Ramsus is taken to the Yggdrasil. Citan and the Elements convince him that his life has meaning.

As a boss character, Dominia is not shown wielding a weapon, but she is able to form a light sword with her right palm to slash her opponent with two slashes. Dominia is an excellent fencer, only rivaled Ramsus in terms of swordplay during boss battles.

Dominia's Gear is the sword-wielding Bladegash, paralleling Dominia's on-foot combat abilities. The Gear is able to form a light sword and to charge itself in each of the four elements, as well as counterattack its opponent for extensive damage. Its charging ability rivals the Gear Brigandier's Ether abilities, which can also charge in each four elements, but does not have the counterattack ability like she has.

Dominia will be fought once along with fellow elements, Kelvena, Tolone and Seraphita at the start of Disc 2.

Dominia is symbolic of Dominions, a type of angel written in the Bible.

Her surname Yizkor is Hebrew for "remembrance". It is also a traditional Jewish ritual prayer for the deceased, which may be a reference to Dominia being an orphan who lost her parents.

The four Elements.
Add a photo to this gallery
Retrieved from "https://xenosaga.fandom.com/wiki/Dominia_Yizkor?oldid=51284"
Community content is available under CC-BY-SA unless otherwise noted.