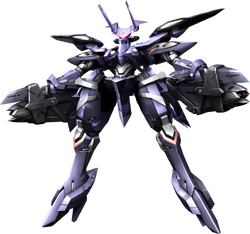 Initially equipped with a Shield Lancer system on one arm and a gatling cannon on the other. It can optionally equip a flight booster and a powerful energy cannon capable of destroying several A.M.W.S. units in one shot.

In Episode III, Asher is reconfigured toward Jr.'s combat style and is capable of being outfitted with the greater assortment of weapons out of all playable mecha. It is installed with Erde Kaiser's power generator halfway through the game, and thus is the only E.S. still capable of operating after its Vessel of Anima is absorbed by Zarathustra.

After the defeat of Zarathustra, with Asher as the only functional E.S., Jin Uzuki ferries the others back to safety.

chaos and Jr.'s unit. Customized for Jr.'s use. A versatile unit capable of handling both ground and air combat, it is prepared with weaponry that can handle all aspects of battle.

It is equipped with the Erde Kaiser's generator as an auxiliary unit. Though auxiliary, the generator--originally fully tuned to operate the Erde Kaiser--outputs a ludicrous amount of power; enough to operate all weaponry trouble-free at full spec without a Vessel of Anima.

As it escaped from Zarathustra, the Asher restarted itself through this generator--despite having lost its Vessel of Anima. The generator is also outfitted with a self-destruct device to keep its secrets protected.

E.S. Asher means Ein Sof (translated as "no end," "unending," "there is no end," or Infinite) and Asher, son of Jacob in the Book of Genesis.

E.S. Asher in the Miltian Conflict.

E.S. Asher on a splash screen.

Model (from Episode III).
Add a photo to this gallery

Cerberus.
Add a photo to this gallery
Retrieved from "https://xenosaga.fandom.com/wiki/E.S._Asher?oldid=48421"
Community content is available under CC-BY-SA unless otherwise noted.