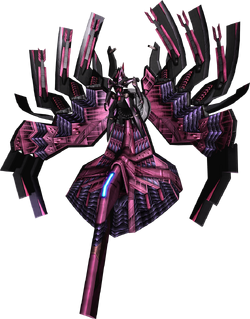 E.S. Dan is the fourth E.S. to appear in the Xenosaga trilogy, debuting Xenosaga Episode II. It is a black disc-shaped E.S. piloted by Voyager, the Black Testament. It is unknown who manufactured it, but Wilhelm probably manufactured it for Voyager.

Dan, despite its initial appearance, is able to achieve insane maneuverability, easily able to keep up with even E.S. Dinah in its Mobile Interface form.

Equipped with a giant transformable shield, its defensive capabilities--when coupled with Voyager's special distortion abilities--are immense. When in its cruising configuration with the shield folded, its mobility rivals that of the E.S. Simeon.

It first appears after Shion Uzuki and Allen Ridgeley successfully steal E.S. Dinah from the Dämmerung. In order to draw KOS-MOS out, Wilhelm sends Voyager in Dan, saying that in order to bring out the knight (KOS-MOS), they will need a villain to threaten Shion, and the "he" (Voyager) would fit the role best.

While on their way to Old Miltia, Dan, along with entire army of drones attack them. Allen is at awe at how the black E.S. can maneuver so freely to above human capabilities. Just when the drones all aim at them, KOS-MOS arrives and completes the transformation of E.S. Dinah. With (what appears to be) an X-Buster, the drones are all destroyed, the black ES teleporting out of harm's way.

It does not make a reappearance until the very end of Xenosaga II, where the White Testament is introduced.

E.S. Dan first appears on the ruined planet of Michtam right after the battle against Richard on the E.S. Gad and Hermann on the E.S. Joseph. It takes their Vessels of Anima and flies into the city. Jin making a remark that it's taunting them to follow.

It reappears to claim E.S. Issachar's Vessel of Anima after its battle against the party, once more departing into the city.

Once the party make their into the Archon Cathedral, they are greeted by none other Voyager, who releases to them Canaan's true purpose and taunts Ziggy before battling them in the Dan. Afterwards, it is defeat, its' Vessel taken, and its' pilot follows not soon after.

It makes one final appearance during the final battle as part of Zarathustra's limbs.

E.S. Dan means Ein Sof (translated as "no end," "unending," "there is no end," or Infinite) and Dan, son of Jacob in the Book of Genesis.

Retrieved from "https://xenosaga.fandom.com/wiki/E.S._Dan?oldid=51062"
Community content is available under CC-BY-SA unless otherwise noted.