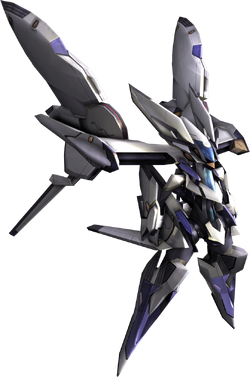 E.S. Dinah is an E.S. unit which started development by Vector Industries about the same time as the KOS-MOS project and was created by Kevin Winnicot to help KOS-MOS in her task as a supplementary weapon. Like every other E.S., it is equipped with a Vessel of Anima, and has also been piloted by Shion Uzuki alone during a short time.

Dinah is a rarity among E.S., in the sense that it can be divided into two parts, the largest part being able to be used as a normal E.S. and a small space ship able to enter hyper space without interacting with the U.M.M Column, while the smallest part, the Dinah Mobile Interface, can be used as a motorbike for KOS-MOS, which can also enter hyper space freely, but she can also use it as a maintenance bed to regain her energy. She also possess the ability to summon the Mobile Interface at will anywhere. Dinah takes its true form if the main vessel and the mobile interface join.

The unit's characteristics include its long travel range (on the level of a space cruiser) and its high speed and mobility in battle. It also has an ample array of firepower; the X-Buster, made available when the unit is operated in conjunction with KOS-MOS, is especially worth noting.

Although it has a two-seat cockpit, when not docked with KOS-MOS, Shion handles everything from unit control to firearms herself, apparently having made the lower seat into a simple navigational station. The unit's head contains a docking connector for the Dinah Mobile Interface.

Dinah is first seen during a flashback Shion has about Kevin Winnicot, where they hope this E.S. will help KOS-MOS save humanity.

It is later revealed that the E.S. is stored inside the Dämmerung. Shion and Allen Ridgeley will attempt to steal it in order to join the Elsa's journey to Old Miltia. They will successfully escape the ship with it, apparently with Wilhelm's approval.

While on course to join the Elsa, Dinah will be attacked by a fleet of ships lead by Voyager in the E.S. Dan. KOS-MOS, from Second Miltia, will sense Shion's distress and will transform her maintenance pod into the mobile interface. When KOS-MOS arrives to rescue Shion, she destroys most of the ships present then joins the main section of the E.S. and the mobile interface to reveal Dinah's true form. She will also become "Blue-Eyed", giving the E.S. more power than any other machine in existence. Using the true form of E.S. Dinah, KOS-MOS destroys the entire enemy fleet with the exception of E.S. Dan which manages to escape at the last moment.

Afterward Dinah is used primarily in battles during the rest of the game.

Dinah is at the beginning possessed by Shion, who uses it to move from a planet to planet when needed, and for making Encephalon dives.

After retrieving KOS-MOS, she retakes her role as pilot of the E.S., and it is used along with the other E.S. throughout the game.

Like all other E.S. (except E.S. Asher), Dinah is destroyed by Zarathustra at the end, its head becoming Zarathustra's head.

E.S. Dinah is the only known craft in the Xenosaga universe capable of entering and exiting hyperspace without having to interact with the U.M.N. first, even though possibly others E.S. can also have this capacity.

E.S. Dinah is capable of flying to anywhere in space from anywhere else in space without having to go to specific U.M.N. Column areas to initiate hyperspace gate-ins. Designed specifically for KOS-MOS, it interlinks with her space bike, the mobile interface, and primarily uses beam weapons. It can still perform the X-Buster attack and utilize the D.S.S.S. sensory system. In Episode III, the frame is altered, sporting a larger set of wings and additional energy weaponry. The E.S. Dinah is also the only E.S. within the game that is a three-seated E.S., as seen in Episode II in where KOS-MOS comes to Shion's rescue and attaches her bike within E.S. Dinah in order to further control it from there, while Shion and Allen are still within the main cockpits.

E.S. Dinah means Ein Sof (translated as "no end," "unending," "there is no end," or Infinite) and Dinah, daughter of Jacob in the Book of Genesis.

KOS-MOS with the Mobile Dinah Interface.

Shion and KOS-MOS on E.S. Dinah.

Dinah kills Inversion in the Omega System.
Add a photo to this gallery

X-CANNON versus Ω Metempsychosis.
Add a photo to this gallery
Retrieved from "https://xenosaga.fandom.com/wiki/E.S._Dinah?oldid=51061"
Community content is available under CC-BY-SA unless otherwise noted.