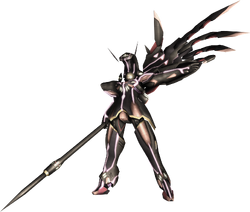 E.S. Issachar is the E.S. that Pellegri pilots, manufactured by Hyams Group. It appears as a boss in Episode II at the Ormus Stronghold, and a boss in Episode III on Michtam. It also appears in Xenosaga: The Animation, where it is revealed Pellegri can Encephalon dive in Issachar while Issachar auto-pilots itself.

It was primarily built for multiple simultaneous multi-directional Ether attacks, making it one of the most air-combat capable Ormus units. The Ether connection base can also be operated as a flexible shield. It is equipped with a spear for close-range defense.

E.S. Issachar means Ein Sof (translated as "no end," "unending," "there is no end," or Infinite) and Issachar, son of Jacob in the Book of Genesis.

Issachar being attacked by Zebulun in Episode II.

Issachar being attacked by Asher in Episode II.

Issachar in Episode III.
Add a photo to this gallery
Retrieved from "https://xenosaga.fandom.com/wiki/E.S._Issachar?oldid=49816"
Community content is available under CC-BY-SA unless otherwise noted.