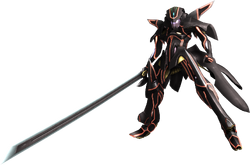 E.S. Levi is a black mech piloted by Margulis in Episode III, manufactured by Hyams Group.

Margulis' E.S. is quite similar to Pellegri's E.S. Issachar; a very dark black and orange mech that carries a giant-sized sword with two floating wing-like attachments similar to Issachar's Crescens Claw. These attachments also function as a logical drive. It was originally designed as a multi-role unit, but because its pilot prefers melee combat above everything else, it has been stripped of most of its longer-ranged weapons. It is instead equipped with a long sword for close-range combat and kunai like objects which are thrown from the arms of the unit.

It was designed to be a versatile unit capable of waging battle at both short and long ranges, but all long-range weaponry was removed at Margulis's request; instead it was equipped with a long sword. It has also been equipped with two intimidation weapons: a throwing weapon similar to a kunai, and a small throwable high explosive.

The large, unfolding logical drive can also be used as a claw for hand-to-hand combat.

E.S. Levi is fought twice in the game. The first encounter is early near Rennes-le-Château. The second encounter is late-game on Michtam.

E.S. Levi means Ein Sof (translated as "no end," "unending," "there is no end," or Infinite) and Levi, son of Jacob in the Book of Genesis.

Blazing Judgment.
Add a photo to this gallery
Retrieved from "https://xenosaga.fandom.com/wiki/E.S._Levi?oldid=48610"
Community content is available under CC-BY-SA unless otherwise noted.