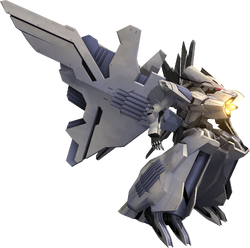 E.S. Simeon is Albedo Piazzolla’s E.S. unit. It is unknown who manufactured it but it is probably U-TIC Organization or Hyams Group.

Like the E.S. Issachar and E.S. Zebulun, Simeon uses the weapon system known as Aird. Along with Albedo, it dematerialized half-way through Episode II and while Albedo later reappeared, E.S. Simeon did not. E.S. Simeon's system is known as the Relic Drive. This drive fuels the E.S. by absorbing the 'Will' of living beings. In Xenosaga: The Animation, it directly absorbs a Kirschwasser (Kirsch) seen bound to its Vessel of Anima and transforms into a giant bio-organic monster with hundreds of tentacles and a gaping maw. It is reduced to a pool of molten flesh and comments from chaos and Jr. suggest that it didn't have a proper Vessel to begin with. E.S. Simeon is later seen in the anime's epilogue restored to its original mechanical form.

The mech seen piloted by Albedo as the White Testament at the end of Episode II and in Episode III is indeed E.S. Simeon, or more precisely Simeon's Vessel of Anima aligned to a new mech chassis. The new frame has no legs and a series of dragon-like extensions rising from the shoulders. These extensions may be meant to resemble the many heads of the Hydra, which would be fitting considering the inborn ability of the pilot.

The new E.S. Simeon is not fought at any point in Episode III and only appears once at Rennes-le-Château. The shoulders are on an axis and look like they could only rotate forward, and back by a relatively small, amount because of the extensions. This may be to compensate for the fact that the arms don't bend at the elbows. Strangely it has an odd number of extensions 6 on the right, 5 on the left which can be seen upon close inspection by counting the pink, triangular parts.

It has a similarity to an AGWS, but its functions are vastly different. Also, AGWS are powered-suits nearer in sense to equipping more than boarding, and it is for a single-person pilot. But, Albedo's craft is being ridden by two people, including the Kirschwasser. Also, absorbing the Kirschwasser, it automates the maneuver control ability, etc, through that function, and the design is not considered a usual mechanism. No records remain about a craft such as this being developed, neither in Vector Industries, nor in Hyams Heavy Industries. Nonetheless, Albedo must not have developed the craft by himself. Is there some 3rd party? Or was it a development of a classified level such that there doesn't even remain a record at all?

As for now, no craft of its equal has been confirmed, and only Albedo has possession. Though entering and leaving the U-TIC Organization, because it does not seem that U-TIC investigates or is developing that craft, there is the possibility that no one but Albedo can operate it.

As for that, does the fact that he's a URTV become the primary factor? Or is it essential to have linked with U-DO? If it is the former, it is perhaps possible that Gaignun and Jr, too, can fly it. However, if it is the latter, for now, of all the people who exist in this world, Albedo becomes the sole operator.

Equipped with a long tail stabilizer which functions as a logical drive, its forte is high-mobility combat. Its ability to deal with any battle situation, short or long-range, makes it an almighty unit.

It was built as a military factory in Labyrinthos on Miltia.

After becoming a Testament, Albedo switched his Vessel of Anima over for use in a new unit, but its name and basic specs remain the same.

E.S. Simeon means Ein Sof (translated as "no end," "unending," "there is no end," or Infinite) and Simeon, son of Jacob in the Book of Genesis.

Albedo's redesigned E.S. Simeon.
Add a photo to this gallery
Retrieved from "https://xenosaga.fandom.com/wiki/E.S._Simeon?oldid=50814"
Community content is available under CC-BY-SA unless otherwise noted.