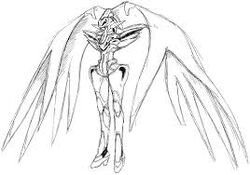 El-Crescens is a scrapped Omnigear. At one point in Xenogears development, Emeralda Kasim was meant to have an Omnigear just like the other main characters. Unfortunately, due to time and budget constraints, the portion of the game where Crescens is aligned with an Anima Relic was cut out of the game and El-Crescens went with it.

A concept sketch of El-Crescens exists within the Xenogears Perfect Works which proves that it was an option intended to be implemented at one point in the game's development cycle. The sketch depicted El-Crescens in the similar organic-like design scheme of its fellow Omnigears, its originally mechanical hand-like wings had turned into a singular flowing form of similar shape which was more like a cape than wings.

Retrieved from "https://xenosaga.fandom.com/wiki/El-Crescens?oldid=47181"
Community content is available under CC-BY-SA unless otherwise noted.