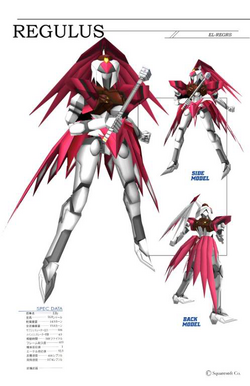 El-Regrs is an Omnigear suspiciously resembling Elly's Vierge that once belonged to Sophia, the Holy Mother of Nisan 500 years ago. Its name can also be translated as "Regurus" or "Regulus".

It was created when the Anima Relic Dinah was aligned with Sophia's Gear. After her death at the end of the Shevat-Solaris War, El-Regrs was taken to Shevat and placed in storage.

When Elly first set foot in Shevat, El-Regrs began to respond when she approached. She was offered ownership of the Omnigear, as she was recognized as Sophia's reincarnation, but she declined in fear and continued to use her Vierge instead.

In Disc 2, when Fei Fong Wong and the rest of the party were captured by Karellen and taken to Golgoda, Elly finally claimed the Omnigear, thinking its power could help save her friends. She took it into battle against two Wel-Gear hybrids of Karellen's making, and while she did manage to defeat them, piloting the Omnigear in battle took a toll on her and she collapsed. What happened to El-Regrs after that point is not known and it is not seen again after that point.

Many fans were disappointed with El-Regrs because while it was one of the better looking Gears in the game it was not a playable Gear, the battle in which Elly fights in it is entirely scripted and the player is not presented with an opportunity to control it.

As a minor consolation, El-Regrs is available as a playable Gear in the Nortune Battle Arena. If a player makes it all the way to the core of Merkava just before fighting Deus then returns back to the surface, El-Regrs will be unlocked and added to the roster of Battle Arena Gears.

Retrieved from "https://xenosaga.fandom.com/wiki/El-Regrs?oldid=43440"
Community content is available under CC-BY-SA unless otherwise noted.