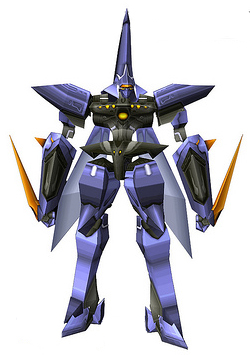 El-Renmazuo is Billy Lee Black's Omnigear. It was aligned with the Anima Relic Joseph in the Anima Dungeon One near the end of the game. El-Renmazuo looked strikingly similar to the normal Renmazuo, though its Omnigear form was measurably more powerful and sported a pair of diamond-shaped wings instead of a heroic cape. Billy puts his new Omnigear to good use as he helps Fei and Elly defeat the massive G-Elements Gear.

Retrieved from "https://xenosaga.fandom.com/wiki/El-Renmazuo?oldid=38178"
Community content is available under CC-BY-SA unless otherwise noted.