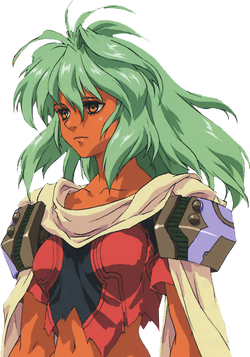 Emeralda Kasim is a 4000 year old nanomachine colony built to aid the human race. She is a playable character in Xenogears.

Kim Kasim, Abel's second known incarnation, created Emeralda during the Zeboim era in the year 6082. Driven by his wife Elly's inability to give birth due to the hereditary genetic damage, Kim analyzed Elly's gene pattern, and created a nanomachine colony. Naming her "Emeralda", due to her emerald green hair, Kim wanted Emeralda to be a form of "pure life", a being who would 'break the curse' for the sake of life itself.

At the time, Myyah Hawwa was manipulating the government, and wanted Kim's knowledge in order to use nanomachines in one last effort to repair humanity's genetic damage.

In 6083, having realized the true nature of his sponsor Myyah, Kim transferred Emeralda to a research facility prepared by Ravine. In an attempt to seize Kim's research, Myyah dispatched a special forces unit into the facility. In the skirmish, Elly was fatally shot, and the distraught Kim sealed himself up with Emeralda in the facility. Myyah reset the human evolutionary cycle by starting a worldwide nuclear war, and the nation was buried underneath the waves.

It would take several thousand years for the facility to be dug up again by the Ethos, and for its various security measures to be breached by Fei Fong Wong's allies.

The group first meets her in the Zeboim Ruins, where they breach the security of Kim's former laboratory and awaken her, but Isaac Stone alongside Tolone and Seraphita take her away.

Later in the game, they rescue her in the underwater Sargasso Point. Although her vocabulary is limited and her language is awkward ("I be strong and make Kim and Elly proud that I their child!"), she is able to comprehend most things. She calls Fei Fong Wong "Kim", which confuses him.

The player may visit the optional Lighthouse near the end of Disc 2, which actually leads to part of Zeboim. Emeralda retrieves her memories and changes her body to that of a teenager/young adult if this sidequest is completed.

In the final cutscene she is seen in her grown form, suggesting that showing up for the Lighthouse side quest is canonical with the story.

She is a strong character physically, but her child-like knowledge of the world gives her a strong dependence upon Fei, whom she recognizes as Kim. With her elemental Ether abilities and the ability to alter her body's shape, she is readily equipped with devastating attacks.

In her teen form, gained by completing the Lighthouse side quest on disc 2, Emeralda's stat gains far exceed those of any other character, with all of her stats increasing upon level-up instead of only some. This distinct combination of good physical skills and ether ability pool on top of making her a great choice for on-foot combat, perhaps not-coincidentally make her an ideal combination of the best traits of her 'surrogate parents.' Her weight in both child and teen form is 96kg, as her artificial body is far heavier than it appears.

In battles, Emeralda can change weaponry within the parts of her body when using her deathblows as she herself transforms into a hammer to knock her opponent, her legs can turn into a drill, and some of her kicks can turn into a scythe blade and her hair can control itself like a whip as both of her hands can elongate into large hands resembling a giant fan to sweep them away with a giant tornado.

In her teen form, most of her moves are changed drastically as a contrast to her child form with the exception of her final deathblow, Dark Beast. Each of her hands can change either a hammer or a mallet and retains some of her kicks can turn her leg into a scythe blade. She can also turn both hands into a Morning Star to hit her opponent down and her long hair is used as a whip to whip her opponents. Her Reycount deathblow had changed color from purple to green.

In both forms, Emeralda can changed into a moving spike crusher to slash her opponent as one of her deathblows.

In Gear battles, her Gear is Crescens and most of its moves are focused on its long hair-like spikes as well as its kicks.

Emeralda in the ending.

Emeralda in the ending.
Add a photo to this gallery

Retrieved from "https://xenosaga.fandom.com/wiki/Emeralda_Kasim?oldid=55649"
Community content is available under CC-BY-SA unless otherwise noted.