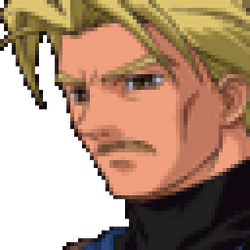 He is a middle-aged Gazel class Solarian with blond hair and a mustache.

He used to be part of Gebler but was reassigned as the head superintendent of the Soylent System where he saved many surface dwellers (Lambs) from becoming Wels and later food and medicine for the population of Solaris. Elly's childhood nanny was one of these rescued Lambs. Erich, feeling guilt, eventually resigned from the Soylent System, and then became one of the administrative staff of the Special Forces.

He was engaged in research with Nikolai Balthasar on the M Project.

He is first seen in Solaris after Elly hacks into his home computer to download information that will help Fei Fong Wong and the others. He slaps Elly across the face for badmouthing Medena. Erich wants to kill Fei, but Elly convinces him otherwise and he lets him go.

He is later arrested by the Imperial Guard when he refuses Karellen's request to hand Elly over to him.

He is later sprung from prison by Hammer and commandeers a Solarian Eagle soldier gear to help Elly, Fei and everyone else escape from Solaris. Their path to freedom is blocked when Hammer turns on the group and threatens them at gunpoint. Grahf and the Executioner then show up to make things even worse. Erich sacrifices himself to protect Elly from them by charging them with his gear, however, the Executioner completely obliterates his gear, killing Erich instantly with no less than a wave of her hand. His last words are his profession of his love for his daughter.

Erich ordering Solaris guards away from Elly.
Add a photo to this gallery
Retrieved from "https://xenosaga.fandom.com/wiki/Erich_Van_Houten?oldid=50506"
Community content is available under CC-BY-SA unless otherwise noted.