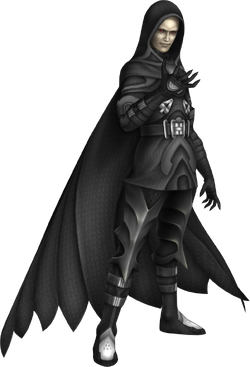 Voyager, true name Erich Weber, was a U.M.N. cyber-terrorist who lived 100 years ago on the planet Abraxas (later Michtam). Voyager was a notorious serial killer who stalked and killed his victims using the U.M.N. He served as Jan Sauer's (later Ziggurat 8) nemesis in the Xenosaga side story Pied Piper, where he was a U.M.N. operator and support agent who worked under Captain Jan Sauer in the 1875th Federation special-ops detachment squad. His partner is Mikhail Ortmann and he oversees operation of the combat robot Bugs.

Erich is a complicated character because he actually has two personas - one is his 'real' identity as Erich, a member of the Federation police and talented programmer - and the other is his online identity as Voyager, a serial killer of unparalleled genius who preys on victims through the U.M.N.

As Erich, he appears to be 28 years old, though he is in reality much older than that according to the Episode III database entry for "Erich Weber", suggesting he's over 150.

In the T.C. 4600s, genetic enhancement and cloning run rampant, and Erich is one of a batch of Designer Children who were produced approximately 150 years before the beginning of Episode I. The purpose for their creation is initially unknown (the Designer Children were actually produced by the Federation to combat the Immigrant Fleet/Ormus). In order to continue living, all of the members of this group are dependent on a drug that stimulates the thyroid to help control their metabolic rate. Erich gets his supply of the drug by working for Dmitri Yuriev.

Another side effect of Erich's genetic manipulation is that he has a congenital brain disorder, which he controls by constructing working memory inside of the U.M.N. This is how he developed such an intense affinity with the network. He became addicted to information and dove deeper and deeper, trying to find what was at the center of the U.M.N. What he encountered was U-DO, which tormented him since Erich also received an intense fear from U-DO and saw the end of all existence. Erich feared dissipating into the Collective Unconscious. This drove him to become Voyager—a position that was originally occupied by Yuriev, who had a similar encounter with U-DO.

As Voyager, Erich kills many people, including Mikhail, Jan's wife Sharon Rozas, and her son Joaquin Rozas. Voyager also massacred lots of infants known as the Nursing Plant Incident. Bugs later terminates his own life after discovering the truth about Erich.

After Yuriev stopped delivering the drug to him, Erich allowed his body to die and entered the U.M.N. to appeal to U-DO. U-DO rejected him, however, and it was under the threat of imminent destruction (for once his brain decayed his consciousness would die) that he was approached by Wilhelm to become the Black Testament.

After killing Sharon and Joaquin, Erich faced Jan as the Black Testament and gave him a choice: join them (presumably as another Testament) or be killed and have his consciousness absorbed into Voyager's. Jan, of course, chose neither and suicided.

Between Pied Piper and Episode I Edit

After those events, Voyager disappeared from history during 100 years, presumably assuming Wilhelm's dirty work, in exchange of the promise of eternal life through Eternal Recurrence.

He appears during one of Ziggy's flashback, as well as during the ending sequence in Wilhelm's office along the Blue and Red Testament in the Animation version of Episode I.

He pilots a black humanoid E.S. Dan with large, plate-like wings and fanned tail, accompanied by numerous cannon drones. When in transit to Old Miltia, Shion Uzuki and Allen Ridgeley were attacked by him. Whether this was to stop them or possibly gauge KOS-MOS's abilities when she promptly rescued them, is currently unknown.

He later appears in the Omega System with the rest of the Testaments. Ziggy attempts to shoot Voyager, but Voyager uses a portal, causing Ziggy to attack and damage himself.

In Xenosaga I & II, his role is significantly expanded and he actually gets speaking lines. He speaks to Ziggy on the Omega System after unmasking for the first time. This leads to Ziggy opening up about his past to Shion and the others later in the game. Before that he confronts U-TIC / Ormus A.M.W.S. pilots Richard and Hermann and speaks with them.

Voyager is sent to kidnap KOS-MOS in her version 4 before she awakes for T-elos to be able to absorb her. He has a confrontation with the team on the Elsa, especially with Ziggy and Shion, yet his attack on Shion makes KOS-MOS awake. The team proceeds to fight him. After losing, he abandons his mission and flees.

He is later seen at Michtam's Archon Cathedral for a final showdown between him and Ziggy. He reveals Canaan's true identity of Lactis and that Canaan/Lactis has been monitoring everyone using Program Canaan for the past 15 years. Voyager reveals what he wants: eternal pleasure, and to enjoy his eternal life along with Ziggy. He engages everyone in battle in his E.S. Dan.

After battle, Ziggy chooses to confront Voyager out of the E.S. Voyager easily defeats Ziggy. Canaan creates the doubt in him of Wilhelm's true intention, and gives him the fear to lose the powers Wilhelm gave him. Canaan offers him to absorb the power of the Compass of Order so that Voyager can have the power of a god, what Voyager accepts and thinks to be Wilhelm's full power. Yet the powers of the compass is too much for him, and destroys both Voyager and Canaan, putting an end to Voyager's life.

Ziggy having PTSD flashbacks of Voyager killing Sharon and Joaquin.

Voyager in the Omega System.

Voyager in the Omega System.

Ziggy and Voyager.
Add a photo to this gallery

Voyager breaking into the Elsa in an attempt to steal KOS-MOS.

KOS-MOS throws Voyager across the room.

Voyager being finished by Ziggy.

Black Testament (with Gnosis "Karma Demon").
Add a photo to this gallery
Retrieved from "https://xenosaga.fandom.com/wiki/Erich_Weber?oldid=49266"
Community content is available under CC-BY-SA unless otherwise noted.