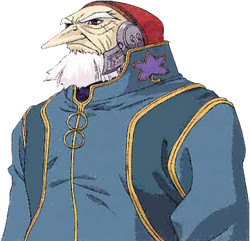 Gaspar Uzuki is one of the three Sages of Shevat and grandfather of former Shevat operative Yui Uzuki. He is seen as an old man with a thick grey beard, a long pointy nose and some kind of mechanical jaw enhancement. He is over 560 years old and his life has been extended indefinitely through nanomachines by Karellen as a means of "punishment".

He was once an expert swordsman who fought in the Shevat-Solaris War on the frontlines. He survived the Diabolos Collapse and received Karellen's life extension. He helped restore Shevat afters its assault by Solaris.

He was one of Queen Zephyr's main supporters before she ascended the throne of Shevat and he still stood loyally by her even 500 years after the fact. He was the only one of the three Sages who did not leave Shevat for the surface world.

Hundreds of years later, he taught Yui and her husband Solarian Guardian Angel Hyuga Ricdeau (later Citan Uzuki) everything they knew about swordplay.

In Shevat, Gaspar helps removes the Limiters in Fei Fong Wong and his allies.

Eventually he does go to the surface in order to help the other two Sages, Taura Melchior and Isaac Balthasar reconstruct Fei's nearly destroyed Gear Weltall.

Like the other two sages, his name references one of the three biblical wisemen (also known as kings) that visited Jesus Christ shortly after his birth.

Retrieved from "https://xenosaga.fandom.com/wiki/Gaspar_Uzuki?oldid=51490"
Community content is available under CC-BY-SA unless otherwise noted.