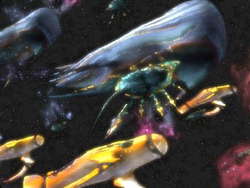 Gnosis, also known as the Pilgrimage Fleet, are monstrous entities shrouded in mystery. They are the main enemies and battle fodder of the Xenosaga series, appearing in many different forms and size.

They were apparently first seen in T.C. 4747, having destroyed the planet Michtam due to the Galaxy Federation's failed Zohar control experiment. However, it was only during the Miltian Conflict on Miltia in T.C. 4753 when they arrived en masse, having terrorized humanity for the last 14-15 years.

The Galaxy Federation has begun various anti-Gnosis projects such as the Zohar Project, building weaponry to combat them with companies such as Vector Industries and Hyams Group. The S.O.C.E. is dedicated to investigating the Gnosis threat. KOS-MOS and T-elos are specially designed Vector androids to combat the Gnosis. Other anti-Gnosis equipment include A.G.W.S., A.M.W.S., the Durandal, the Woglinde, the Merkabah, the Rhine Maiden on the Dämmerung.

Anatomy of a Gnosis[edit | edit source]

The Gnosis are, for the most part, non-physical existences. The Gnosis exist in a unique dimension separate from the physical plane called the imaginary number domain. Normally, it is impossible for humans to come into contact with them. By activating the Hilbert Effect, Gnosis within the radius of the effect are drawn into the real number domain, aka the physical world, allowing them to be affected by conventional weapons. Gnosis also have to enter the physical world in order to attack an opponent, giving a small window of opportunity to counterattack.

Strangely, despite their destructive powers and later displays of obvious sentience, the Gnosis are mostly composed of pure salt, aka sodium chloride. When translucent, they are composed of water and sodium hydroxide.

Gnosis also appear to have the ability to possess machinery and integrate it into their body, thus giving themselves extra abilities based on the machinery they possess. A Gnosis of the "Gremlin" type possessed an A.G.W.S. unit and was able to use its weapons.

Additionally, what looks human on one side looks like a Gnosis on the other side. Everything that exists in the physical world also exists in the imaginary number domain, which is why there are even Gnosis planets, such as Cathedral Ship. This is due to the physical and imaginary domains being two halves of the Lower Domain.

The main factor that makes Gnosis arrive in the physical domain is the energy of U-DO, ported through the Zohar. [1]

According to Jr., Gnosis have been reported throughout history, albeit in very few sightings and nothing near the scale at which they currently appear.

It was only during the Miltian Conflict in T.C. 4753 that the Gnosis came into human's dimension en masse. It was this event that caused the dispersal phenomenon that was destroying the universe to rapidly advance.

During the Miltian Conflict, a young Shion Uzuki witnessed the brutal deaths of her parents, Suou Uzuki and Aoi Uzuki, at the hands of 27-Series Asura combat Realians. This drove Shion over the edge of despair, causing her latent abilities to resonate with the Zohar stored in Labyrinthos, resulting in direct communication with U-DO. In response, U-DO opened a portal between the real and imaginary realms, and the Gnosis entered the real realm en masse.

How a Gnosis is Created[edit | edit source]

When that person dies, they lose their physical body, and in turn lose their anchor to the real number domain. They become an entity that purely exists in the imaginary number domain, where everything is exposed, including the malice and darkness that exists within themselves and others around them.

Although the term 'Gnosis' generally applies to consciousnesses that seek dispersal, everything that exists on the imaginary number domain is composed the same as a Gnosis. This is also why Abel's Ark is seen as a giant Gnosis, yet at the same time it is not a Gnosis.

If someone is touched by a Gnosis, they either die by breaking down into salt, or become Gnosis themselves. The latter of which occurs if one is touched but survives. However, Shion Uzuki was touched by a Gnosis and failed to turn into a Gnosis. Gnosis are human wills who resonate passively with Anima to the point of seeking dispersal and destruction. Because they fear and reject other people, they reject the entire collective consciousness of humanity. This rejection is so complete that when they are drawn into the real number domain, they react violently out of pure terror, killing humans and fellow Gnosis alike in order to destroy any source of their fear.

People who become infected with this fear by contact with Gnosis may also become a Gnosis themselves if they submit to the fear or try to escape from it. People who resonate purely with Anima do not become Gnosis, which may be why Shion never turns into a Gnosis after being attacked and almost whitened.

From a human's perspective in the real number domain, it may seem as if Gnosis are able to form groups or tribes. However, Gnosis do not form into groups, as they are unable to recognize the existence of each other. All Gnosis see themselves as the only one.

That said, Gnosis can and do clump into groups if they have the same "wave-movement", forming different shapes, becoming larger in scale, etc. As they are beings of rejection, they do not become one being.[3]

Due to the variations in their external appearance, the standard practice is to categorize and name Gnosis after mythical, legendary, and folkloric creatures. Examples of these are Goblins (top-heavy white bipeds), Golems (gangly humanoids with flexible arms), Manticores (large greenish caterpillars) and Gremlins (fishlike beings, one of which merged with an A.G.W.S. in Episode I as a boss on the Woglinde). Other common types include boxlike whales and amber-skinned seals.

Gnosis is the Greek word for "knowledge".

Gnosticism is a system of beliefs which teaches that salvation is achieved through the pursuit of the knowledge of the supreme divinity.

Various Gnosis in Episode I.

Various Gnosis in Episode I.

A Gremlin Gnosis combines with an A.G.W.S. to form a Cyclops Gnosis.

A human Federation soldier turned into salt by a Gnosis during the Gnosis invasion of the Woglinde.

Shion being transformed into salt.

A "Golem" Gnosis on the Elsa.

Betty (half human, half Gnosis).
Add a photo to this gallery

Shion being held by a Gnosis.

KOS-MOS fighting Gnosis.
Add a photo to this gallery

Virgil and his Gnosis.

Kevin as a Gnosis.

The Gnosis arrive outside Labyrithos.

Gnosis on Fifth Jerusalem.
Add a photo to this gallery
Retrieved from "https://xenosaga.fandom.com/wiki/Gnosis?oldid=51847"
Community content is available under CC-BY-SA unless otherwise noted.