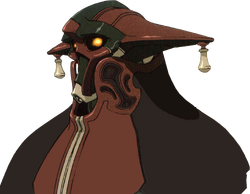 Grahf (Graf in the original Japanese version) is an antagonist in Xenogears that is deeply tied with Fei Fong Wong's past, as well as the ultimate fate of Lacan.

Despite being a being of extreme power, Grahf's genesis was from Lacan's own powerlessness at losing Sophia.

As the personification of Lacan's will, Grahf is an incomplete manifestation of the Contact's power. This is still an impressive amount, as like Id, Grahf possesses immense strength, to the point that he could effortlessly destroy Gears with his bare hands.

Grahf seeks to complete himself by merging with the next reincarnation of the Contact, even going onto possessing the wills of others after his original body's death.[1]

Grahf's ultimate goal is to awaken Deus and obliterate all life. Then he would use the Contact's full power to destroy Deus and everything else, in order to release everyone from the reoccuring cycles of tragedy and fate, notably of Elehayym and Myyah.

In 9501, during the Shevat-Solaris War, Lacan was reeling from the death of Sophia and desired to find the Zohar, in order to gain its power. Coming across a captive Myyah Hawwa in Shevat, he helped her escape, and they went to the Land of Bethlehem. There, due to Elehayym not being present, as well Lacan's own incomplete spiritual growth as the Contact, his contact with the Zohar was incomplete, changing him into Grahf.

A berserk Grahf awakened the Diabolos Corps, which were Deus's prototype mobile terminals. The Diabolos Corps responded to his rage and destroyed not only Solaris, but the surface. Roni Fatima and his allies took over the Omnigears that previously belonged to the Gazel Ministers and combined their might with the Solarian Army. destroying the Diabolos Corps.[2] However, this victory came too late, as 98% of the world's human population was already killed, leading to the event being known as -The Day of Collapse-.

In 9510, Grahf's physical body died, leaving only his will behind.[3] Determined to continue his mission, his will lived on by possessing the wills of others, awaiting the next reincarnation of the Contact.[1]

Grahf discovers the new incarnation of the Contact in Fei Fong Wong when Fei is still a child and attempted to meld with him in 9985. However, Fei's father, Khan Wong, attempted to stop him. During their battle, Fei was unable to contain the powers passed onto him by the Existence and released a force so powerful that Fei's mother, Karen Wong, was killed. Fei refused living since then, and Id was the only identity left.

Grahf took Fei away and began travelling with him for about ten years, always trying to keep one step ahead of Khan, who was tirelessly searching for them.

In 9993, Grahf let Id loose on civilizations such as Elru in order to cause chaos and destruction, as well to strengthen his abilities.

In 9996, Grahf fought Khan again and passed into the body of Khan. Khan dropped off Fei in Lahan Village.

Despite his dubious nature, Kaiser Sigmund openly associates with Grahf and his representative the Executioner. Grahf often brings the Kaiser items and technology from Solaris like Weltall and a Gate Keeper device.

When Grahf found out that Fei was in Lahan Village, he organized a plan to draw out Id and his power. He manipulated Gebler into sending Elly and her squad to retrieve a Weltall. As planned they crashed in the village and started fighting. Fei first saw him in Alpha Weltall, he commanded the gears to attack him before leaving. He first appears physically to Fei in the desert outside of Dazil revealing he successful plan. He later appeared to Myyah after Ramses had a flashback nightmare, telling her to stay out of his way.

However, he rarely fought directly, and instead on several occasions granted what he called "the Power" to various people by modifying the 'marking' on their Gear, allowing them to gain more power from the Zohar.[4] This allows antagonists such as Vanderkam, Isaac Stone, and Shakhan to challenge Fei again with enhanced abilities, but it invariably leads to madness, and their resulting destruction.

He later appeared to fight against Fei with the Executioner in Solaris.

When Fei went to Mahanon after it rose, Grahf and Karellen stopped him. Fei was unable to beat Grahf but Karellen forbade him from merging with Fei to use him as bait for Elly.

It wasn't until after Fei merged his personalities together that her finally learned that Grahf possessed his father. Fei was able to beat Grahf with the newly acquired Xenogears. After that, Grahf decided to temporarily stop the Zohar by merging with it, this cost him his (as well as Khan's life) after Alpha Weltall exploded.

Grahf is from the German "graf," meaning "count" or "earl".

"That is our purpose... That is our destiny!"
Add a photo to this gallery
Retrieved from "https://xenosaga.fandom.com/wiki/Grahf?oldid=56254"
Community content is available under CC-BY-SA unless otherwise noted.