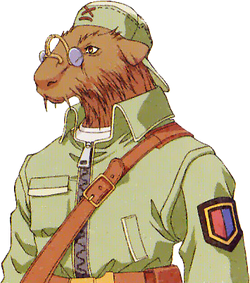 Hammer the Supplier is a rat-form demi-human merchant and prisoner from the D Block of Nortune, Kislev. After being rescued, he follows the main group for a large portion of Xenogears, offering his services.

Despite his happy-go-lucky attitude, it is eventually revealed that Hammer has some deeply-rooted psychological issues concerning jealousy of others, and wanting to feel important and needed.

Like all other demi-humans, Hammer was imprisoned in D Block partly because of Kaiser Sigmund's harsh anti-demi-human laws and policies, but mostly because he "slipped up" and was caught pulling a confidence game. When put through the traditional prison "Baptismal Ceremony" he was given the prisoner rank of D as he had lacked any real combat ability.

He was an associate of Ricardo "Rico" Banderas, regularly doing Rico's laundry in part because of this. In Nortune, he worked as a merchant, deceptively claiming his prices were lower than anywhere else (He buys and sells them for the same price), as a sales pitch. He also manages at one point to procure a FixBot Gear to supply Gear parts.

He somehow uses his connections with Fei Fong Wong to convince the higher ups to let him go, and for some unexplained reason gets a full pardon from his prison sentence as soon as Fei becomes the Gear Battling Champion.

Hammer becomes a close ally to the protagonists, joining the crew of the Yggdrasil (sharing a room with Rico), and his "mad skillz" come in very handy whenever the group needs something difficult to procure, especially in the way of information which he somehow gets surreptitiously, and is most always surprisingly accurate. He's also a top-notch mechanic (or so he claims) and is able to supply Gear parts as well as repair Gears. However, upon boarding the Yggdrasil, his skills become less and less essential, to the point where he's conscious about it, feeling reduced to the role of a "bit-player" as he would later put it.

He even goes with the party to Solaris to help gather information and barter all the latest items found there, however while there he is turned by Karellen, who promises him a great reward, including his own brand of fighting power, if he can bring Elly Van Houten back to him. Mere steps away from freedom, Hammer surprises the entire party when he pulls a gun on Elly and demands that she return with him back to Etrenank. Elly's mother Medena Van Houten stepped in front of the gun and after repeated orders to move out of his way Hammer finally shoots her in the head. When the party escapes Solaris, Hammer stays behind with Karellen.

When he appears again in Anima Dungeon Two, it is revealed that Hammer was surgically grafted into the structure of a massive Wel-Gear and instructed by Karellen to destroy the party at the second Anima dungeon and again return Elly to him. His Wel-Gear form was a tough opponent and in spite of performing several self-modifications/mutations in battle he was unable to defeat Fei and Rico and return Elly to Karellen.

He apologized to Elly, who was able to forgive him for everything that he had done, including killing her mother. He also reminds Rico to go back to Kislev, as he's next in line to be Kaiser, much to Rico's surprise of him knowing this. Hammer died when his Wel-Gear fell into a massive ravine and self-destructed.

Hammer was an important factor in Rico's character development, and as part of the recurring theme in Xenogears of main characters losing friends, family and loved ones, and mourning their loss (as also mentioned in the lyrics of the song Stars of Tears). When Hammer still lived, his relationship with Rico could appear acrimonious, with Rico hurling insults and abuse in Hammer's direction. But Hammer's loss was very painful for Rico. Rico mourned for Hammer, angrily insisting that that it hadn't been Hammer's fault. For the rest of disc 2, Rico would fondly reminisce about the time he spent with Hammer, in stark contrast to how they were usually seen interacting when Rico still lived, indicating that the two had in fact been fairly close.

Hammer's mad skillz.
Add a photo to this gallery
Retrieved from "https://xenosaga.fandom.com/wiki/Hammer_(Xenogears)?oldid=48526"
Community content is available under CC-BY-SA unless otherwise noted.