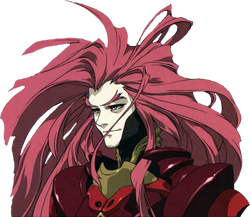 Id is a character and antagonist in Xenogears.

Id is an identity born during the physical and mental trauma Fei Fong Wong suffered when he was 4 years old.

When Fei dissociates into this identity, he becomes insane, destructive, and extremely powerful. Id's power is a manifestation of Fei's status as the Contact, a glimpse of what Fei could be if he chose to awaken fully. Due to the disassociated personalities within Fei, he is unique among previous incarnations of the Contact, being at the same time fully awakened, and yet not.

Fourteen years ago, when Fei was around four or five years old, Karen awakened as the next incarnation of Myyah Hawwa, sealing away her original personality. When Myyah suspected Fei of being a new incarnation of the Contact, she conducted horrific experiments on Fei, taking him to testing labs and bringing in various humans and demi-humans who had a high compatibility with the Anima Relics. She would have them attempt to make psychic contact with Fei to forcefully awaken him.[1] This continual trauma planted the seeds for Id to later emerge.

Things came to a head in 9985, when Grahf discovered the child Fei and attempted to meld with him. Fei's father, Khan Wong, attempted to stop him. During their battle, Fei was unable to contain his powers as the Contact, and released a beam of light that arced back towards him. Just before the beam could hit Fei, Karen regained control and used her body as a shield, protecting her son from the blast. Managing a final smile down at her son, Karen then collapsed over him, succumbing to her injuries. Fei was then taken away by Grahf, with only had a memento of her: her pendant—the Pendant of Nisan.

In order to deal with the guilt and trauma of his mother's death, Fei's personality split into three parts: the 'coward', who turned inward and focused only on positive memories of his past, Id, who took the brunt of the pain and guilt, and Fei, the outside shield that had no memories.

Grahf traveled with Fei for about ten years, always trying to keep one step ahead of Khan, who was tirelessly searching for them.

In 9993, Grahf turned Id loose on civilizations such as Elru in order to cause chaos and destruction, as well to strengthen his abilities. At some point Kahran Ramsus was severely injured by Id, an event Ramsus still had nightmares of years later.

In 9996, Khan located Grahf again, and battled him in order to take his son back. However, Grahf passed into the body of Khan, thus forming a relationship very similar to that of Fei and Id. Khan, disguised as Wiseman, dropped off Fei in Lahan Village, with Id was sealed in deep dormancy in Fei's subconscious, in order to prevent Fei from being killed by Grahf. Due to reverting to his third artificial persona, Fei had no memory of his life prior to being fifteen years old.

When Timothy, Fei's best friend, is killed in Lahan Village, Fei awakens Id once again after years of peace.

Whenever Id surfaced, Fei's Gear Weltall transformed into Weltall-Id, a blood-red Gear of incredible power with six glowing wings made of energy. Even without his Gear, Id is monstrously powerful and fully capable of destroying Gears bare-handed.

While exploring the Zeboim Ruins, Id demands Emeralda Kasim from Isaac Stone for unknown reasons. He proceeds to fight the group. After losing, Wiseman attempts to stop Id, and the scene ends on a cliffhanger.

After Fei witnesses the deaths of Erich and Medena Van Houten, Id awakens in Fei and completely destroys Solaris in Weltall-Id, causing it to explode and sink into the ocean, killing a massive amount of people.

Id is given peace near the end of the game during The Land of Bethlehem scenes, when Khan dies.

Due to the experiments and trauma Fei suffered as a child, his mind is split into three personas:

Id is loosely based on the form of the subconscious mind according to psychologist Sigmund Freud, with distinct differences due to Id's origin and specific role in Fei's subconscious, versus the Freudian id. For example, the id is the only personality structure that exists from the start of a person's life, as opposed to Id, who was born due to trauma[2]. Likewise, the Coward and the artificial persona Fei could be seen to correspond with the roles of the ego and the super-ego in Freud's theory of the mind.

An example of the roles played between the three constructs is shown, in Disc 1 at Nortune, Kislev, when Fei enters his subconscious for the first time, and finds his younger self watching a memory of him playing with his mother. Fei wonders to himself if these are his memories, but then slowly turns to find another child. This child is left in the dark, and states: "You shouldn't be here."[3]

At some point, Fei develops a fourth personality, designed to feel and think nothing.[4]

Because of these different personalities, Citan diagnosed Fei with dissociative multiple identity disorder.[5]

Id is a fully awakened Contact, giving him near-infinite control over the forces of reality, Ether. His ability is so great that it is physically impossible to measure the Ether response of him or his Gear, much like Grahf or a fully awakened Antitype.

Predictably, Id uses these powers destructively. He can create black holes, fire energy waves, or enhance his body to superhuman levels able to contend with any foe in close quarters. He also possesses telekinesis, able to, while piloting his Gear, lift an entire ship up and hurl it. He can also fly, and in one occasion, teleport.

The oddest of these powers is the ability to change his appearance. Even when Fei was a child, Id manifested as a full-grown adult. {cite} These manifestations also come with his outfit change, meaning that he likely generates the armor out of Ether itself, or at least stores it away using Ether and retrieves it immediately upon transforming.

As a boss character and during Kahram Ramsus' nightmare, Id is able to throw a disc on his opponent and using his original self's fighting style as his deathblows which he uses to destroy most Gears or defeating opponents using his bare fists.

Id in front of Weltall-Id.
Add a photo to this gallery
Retrieved from "https://xenosaga.fandom.com/wiki/Id?oldid=51316"
Community content is available under CC-BY-SA unless otherwise noted.