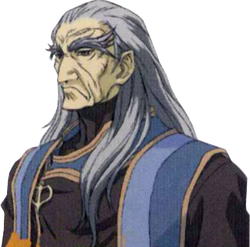 Isaac Balthasar, also known as Ol' man Bal, is one of the Three Sages of Shevat, the other two being Taura Melchior and Gaspar Uzuki.

During the Shevat-Solaris War, Balthasar repaired Gears for Shevat and the surface army. He survived the Diabolos Collapse and received Karellen's life extension. He helped restore Shevat afters its assault by Solaris.

He became the great grandfather of playable character Maria Balthasar and grandfather of Nikolai Balthasar, creator of the two powerful unpiloted Gears Seibzehn and Achtzehn. He raised Maria after her escape from Solaris, although after a while, he apparently left her at Shevat while he chose to live away from Shevat.

Balthasar lives in the cave under the Aveh desert and Fei Fong Wong and Bart Fatima meet him early in the game.

He is one of the first to notice Fei's Gear, Weltall, as "the Host for the Slayer of God."

After Weltall is nearly destroyed by Kahran Ramsus, Balthasar restores and upgrades the Gear to a more powerful version with the help of the other two Sages. This results in Weltall's transformation into Weltall-2 which has a built-in System Id.

Like the other two sages, his name references one of the three biblical wise men who visited Jesus Christ shortly after his birth.

Retrieved from "https://xenosaga.fandom.com/wiki/Isaac_Balthasar?oldid=51491"
Community content is available under CC-BY-SA unless otherwise noted.