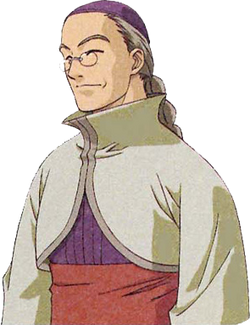 Bishop Isaac Stone is an antagonist in Xenogears. A bishop of the Ethos Church, he is a trusted father figure for Billy Lee Black, having come in to help convince and sponsor Billy into becoming an Etone at a critical time in Billy's life.

Originally hailing from Solaris, he was once a cadet at the Jugend Military Academy in Etrenank, where he was originally known as Isaac Stein. He also attended Jugend with Kahran Ramsus, Myyah Hawwa, Hyuga Ricdeau (Citan Uzuki), his personal rival Jesiah Black, and the love of his life, the woman who would become Racquel Black.

When Jesiah, now going by the assumed name of Jessie, moved down to the surface to start a family, Stein followed him looking for revenge. He joined the Solarian-run church, known as the Ethos Society, where he rapidly became a Bishop under the assumed name of Isaac Stone. He then formulated a plan to strike back at Jessie in the way that would hurt him the most: through Jessie's own family. He sent the Wels, who were produced and controlled by the Ethos, out to Jessie's house to murder Racquel, having no qualms about doing so. In his warped mind, Racquel became 'tainted' when she chose Jessie over him.

After the Wels had attacked, Stone swooped in and was the first one to befriend and console Billy Lee Black and Primera Black, the two surviving children. Using his position as a supposed man of the cloth and a trusted authority figure, he convinced Billy that Jessie was to blame for his mother's death. Billy fell for Stone's manipulation and eventually became an Etone, a member of the church who defended the people of the world against the very Wels that Stone had sent out to murder his mother.

The truth of Stone's actions only came to light four years later as darker underside of the Ethos organization was revealed. Stone ordered the death of Verlaine, Billy's friend. Once again, Billy's heart was broken upon learning that the man he had considered a father figure never actually cared for him and just used him as a tool to strike back at his father.

Piloting the Alkanshel, Stone confronts Billy and his new companions, but after he is defeated once, he is approached by Grahf, who offers him "the Power", which Stone accepts. In the ensuing battle, when all seems lost, Jessie appears and, using his modified Buntline Gear, he and Billy are able to destroy the Alkanshel and bring Stone to his final end.

Add a photo to this gallery
Retrieved from "https://xenosaga.fandom.com/wiki/Isaac_Stone?oldid=56142"
Community content is available under CC-BY-SA unless otherwise noted.