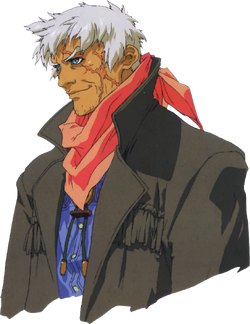 Jesiah "Jessie" Black (Jessiah "Jesse" Black in the Japanese version), his original surname being Blanche, is Billy Lee Black's and Primera's father. He is a gruff and rash gun-wielding ex-Element of Solaris.

Jesiah is the child of Abram Blanche and Mariah. He was born in Etrenank, Solaris as Jesiah Blanche.

In 9978, Jesiah entered Jugend Military Academy. He was once good friends with Sigurd Harcourt, Citan Uzuki and Kahran Ramsus, his fellow ex-Elements. He was well liked by all three of the other Elements. Jessie was the Earth Element. Ramsus seems to respect him a lot as he is willing to stand by and practically let him walk in and destroy the Etrenank Gate in Solaris. He was once even the commander of Gebler some time before Ramsus.

Jesiah had a heated rivalry going with fellow Solarian soldier Isaac Stein (later Ethos Bishop Isaac Stone), and it drove Stein mad that everything he did Jesiah did better at. He became an Element and Stein didn't, he scored the position of Gebler commander and Stein didn't, and worst of all he won the love of Racquel and Stein didn't.

In 9983, Jessie married classmate Racquel Bennetnashe and had Billy Lee Black right after.

In 9990, Jessie left his position to head down to the surface with his wife and son after learning about the M Plan. In order to escape Solaris, Jessie opted to hide his identity.

In 9992, Jessie had Primera. He also met Gaspar Uzuki. He joins the guerilla fighting Corps headed by Gaspar at the 3rd invasion of Shevat. He also steals Buntline from the Gebler headquarters.

In 9993, Jessie left his family to fight back against Solaris and Gebler.

In 9994, he had his face surgically altered to mimic Shevat engineer Joshua Black. He has also taken up dressing like Joshua in order to keep his friend's memory alive, and changed his surname to Black.

In 9995, Jessie suffered Stein's eventual wrath when he followed him to the surface and used Wels to brutally murder Racquel, then swooped in under the guise of the benevolent Bishop Stone of the Ethos and consoled his children and turned Billy against his father.

In 9997, Jessie returned to Billy and Primera. He is disliked by Billy, although Prim welcomed him.

Jessie makes a memorable entrance into the game's storyline by pointing his signature carbine rifle at Elly's head when he thinks she's trying to abduct Primera on the Thames. This of course is a misunderstanding and does a lot to quickly establish his "shoot first, ask questions later" characterization.

When Jessie's past and the truth about the Ethos church are explored, Billy does a lot of soul searching and comes to the realization that his father was right all along in his own way. Jessie and Billy are able to reconcile their differences after defeating the villainous Bishop Stone once and for all. Billy's new mission, stopping Karellen, Myyah Hawwa, and the Gazel Ministry's plot to reactivate Deus and kill off all humanity drew them away from one another, but Jessie was always there to help when the need arose, including accompanying the party to Solaris and helping Citan by fending off armed guards with his carbine rifle.

Jessie is conspicuously absent from disc 2 of the game, leading to the inevitable questions about his ultimate fate.

Retrieved from "https://xenosaga.fandom.com/wiki/Jessie_Black?oldid=51869"
Community content is available under CC-BY-SA unless otherwise noted.