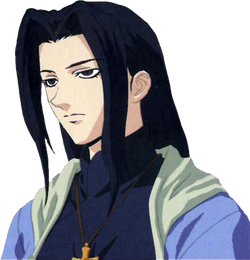 Karen Wong is the mother of Fei Fong Wong and wife of Khan Wong in Xenogears. She died fourteen years prior to the events of the game, when Fei was only four years old.

It is implied Karen was born in Shevat, and she was the Nisan Orthodox postulant. This means she wasn't the Holy Mother of Nisan, but was simply a candidate. It is unknown if Karen's Pendant of Nisan is the same one Sophia had hundreds of years ago, or merely a recreation.

She met Khan Wong when he worked as a lieutenant in Shevat, eventually giving birth to Fei.

When Fei was little, Karen used to play with him by bouncing a ball back and forth. This remained one of the precious few childhood memories that survived Fei's amnesia.

When Fei was around four years old, Myyah awakened in Karen, sealing Karen's personality away. Upon discovering that Fei was the current incarnation of the Contact, Myyah used her new position to conduct experiments on Fei in order to forcefully awaken him. Taking him to testing labs, Myyah brought in humans and demi-humans who had a high compatibility with the Anima Relics and had them attempt to make psychic contact with Fei, dying in the process. The process caused much psychological damage on Fei's psyche, eventually resulting in the inadvertent creation of Id.

Fei attempted to tell his father about Karen's strange behavior, but Khan simply dismissed it, even continuing in his own work as he began to realize Karen's change in personality, as well as the experiments.[1]

Ten months after Myyah awakened in Karen, Grahf came to their home, wishing to collect Fei for his own plans. As he confronted and attacked Khan, Myyah stood by passively. The encounter triggered a spontaneous release of Fei's power. As Fei's own powers threatened his life, Karen's original personality resurfaced momentarily, long enough to throw herself in front of her son, shielding him with her own body and dying in the process.

Karen's pendant, which was the Pendant of Nisan, was given to Fei, and Fei subsequently gave it to Elly Van Houten, a reincarnation of Sophia.

The name "Karen" is a shortened form of the name 'Katherine'. Both names reference the Greek word καθαρός, meaning "pure".[2]

Karen being possessed by Myyah.

Fei being experimented on by Myyah as Karen.

Fei and Id talk about Karen.
Add a photo to this gallery
Retrieved from "https://xenosaga.fandom.com/wiki/Karen_Wong?oldid=51359"
Community content is available under CC-BY-SA unless otherwise noted.