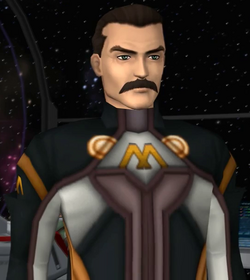 Kazuichi Moriyama is a minor character from Xenosaga Episode I. He held the rank of Captain in the Galaxy Federation Navy, though he was also part of the investigative force following the disappearance of planet Ariadne as captain of the cruiser Woglinde.

He was well liked for his strong sense of responsibility, warm personality, and the high degree of understanding he exhibited towards his subordinates. He defended Shion Uzuki from Andrew Cherenkov's berating.

Despite his bold command during the large-scale Gnosis attack upon the Woglinde, he lost his life to a Gnosis that smashed directly into the CIC (Combat Information Center).

Kazuichi in the anime.

Kazuichi in the anime.
Add a photo to this gallery
Retrieved from "https://xenosaga.fandom.com/wiki/Kazuichi_Moriyama?oldid=47494"
Community content is available under CC-BY-SA unless otherwise noted.