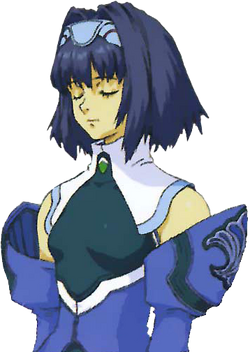 Kelvena (Cherubina in the original Japanese version) is a member of Elements teamed with Dominia Yizkor. She is the Water Element, and the calm and thoughtful Ying to Domina's fiery and passionate Yang.

While not always very assertive, Kelvena seems to be the unspoken leader among the Elements, playing the role of quiet adviser to Dominia during their missions. She is employed by the Intelligence Bureau, leader among the forces associated with the element 'Water', and as such she has access to more information than is exposed to the others -- including direct commands from the Ministry (or so it seemed - it's not a directly quoted fact).

As far as raw talents go, Kelvena is definitely far in the lead. Her ether potential is so great she is forced to keep her eyes closed in order to fully control it, though she is not blind, as most people seem to think. Her eyes are open in battle. This allows her greater concentration and control over her abilities and her emotions. Obviously, she would have to be calm and collected at all times, to keep such a strong ether talent under wraps.

In her Jugend days, Kelvena's life was moderately normal. She and Elly roomed together - like Hyuga and Sigurd, actually - and became very close friends, even when they were both set up to be chosen as Elements.

Other than this, no previous connection with Ramsus was mentioned - she may have been Solarian-born, or just an upgraded Lamb taken into Jugend after some sort of test. She really takes after Citan - she must have impressed Ramsus.

Kelvena pilots the dolphin-like Gear Marinebasher, which combines with the other three Element Gears to form the massive G-Elements.

Kelvena is symbolic of cherubim.

The four Elements.
Add a photo to this gallery
Retrieved from "https://xenosaga.fandom.com/wiki/Kelvena?oldid=49702"
Community content is available under CC-BY-SA unless otherwise noted.