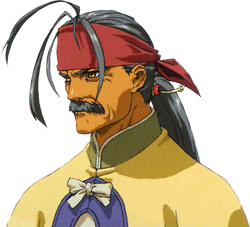 Khan Wong was a martial arts master and father of Fei Fong Wong.

He was an operative from Shevat who married a surface dweller Lamb named Karen and had a son named Fei. Khan's duties to Shevat kept him away from his family often so he was unaware that while he was gone, his wife, who became possessed by Myyah Hawwa, was performing ghastly experiments on Fei with the help of Karellen in order to awaken his powers as the Contact. Khan was also oblivious to the fact that Fei had also developed two split personalities because of these horrible treatments. Fei attempted to tell Khan about Karen's behavior, but Khan simply handwaved it and dismissed it as childish fantasies.

By the time Khan had realised what was happening, it was too late. By that time Grahf had become aware of Fei's existence and had come seeking him out in order to inhabit his body and complete the transmigration circle that he started when he was Lacan, the previous Contact. Id awakened within Fei when Grahf appeared before him and Id used Fei's immense powers as a Contact to severely injure Grahf and protect himself, but also killed his mother in the process.

Grahf kidnapped Fei from Khan and began travelling with him for about 10 years, always trying to keep one step ahead of Khan, who was tirelessly searching for them.

Eventually, Khan caught up with them in 9996. He defeated Grahf in combat and created a new personality in Fei to suppress Id. However, before Grahf's "death", he transmigrated into Khan's body. Khan's resilient mind and will were enough to temporarily resist Grahf for a time, but he knew he could not hold him back for long. While retaining control of his body, he took Fei to the remote village of Lahan and under his newly adopted guise of Wiseman, he left his son in the care of Chief Lee.

Over the course of Fei's adventure, Khan was able to temporarily wrestle control of his body away from Grahf and appeared to Fei periodically as Wiseman in order to give him help and advice along the way.

It is eventually revealed to Fei through Id that Khan is Wiseman, who has been assisting him all this time. When Fei tries to reunite with his father, Grahf takes control once more and reveals to Fei that not only is he his father, but he is also his most dangerous enemy. When Fei and his friends finally defeat Grahf, he sacrifices himself in order to temporarily knock out the Zohar, which is powering Deus. All four personas perish when his Gear self-destructs.

Wiseman in the Bledavik Tournament.
Add a photo to this gallery
Retrieved from "https://xenosaga.fandom.com/wiki/Khan_Wong?oldid=48298"
Community content is available under CC-BY-SA unless otherwise noted.