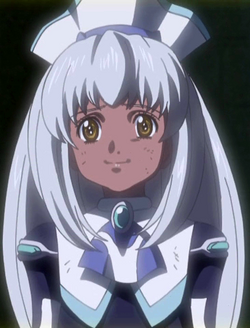 Kirsch is a Kirschwasser created by Joachim Mizrahi who is physically and emotionally abused by Albedo Piazzolla, exclusive to Xenosaga: The Animation.

The story of this Kirschwasser was all about finding her own identity and her "heart" and trying to be good in spite of being surrounded and influenced by some rather evil people.

She used to be Albedo's personal assistant Realian who escaped his custody and disguised herself as a new model 100-Series Observational Realian unit and snuck about the Galaxy Federation cruiser Woglinde.

There she has a run-in with Shion Uzuki who strikes up a friendship with her; unfortunately she was recaptured by Albedo during the Gnosis attack on the vessel and was returned to her role as his servant which she accepted, likely as a form of Stockholm syndrome.

The Kirschwasser ultimately sacrificed herself and was incinerated on Proto Merkabah in the final episode, using her free will to save Second Miltia from being destroyed by it. In the game this role is filled by KOS-MOS, though she survives while the Kirschwasser perishes.

Albedo tells Kirsch that hopefully, she will last longer than his dead ones.

Kirsch disguised as a 100-Series Realian on the Woglinde.

"You like Bunnie? Well, guess that makes two of us then."

Virgil calls her a disgusting freak of nature.

Albedo tells Kirsch that she can never live as herself in the universe.

Albedo slaps Kirsch's face and throws her across the room.

Albedo slaps Kirsch's face and throws her across the room.

"Stop it! She doesn't deserve that!"

"Stop it! She doesn't deserve that!"

Kirsch cries when Shion hugs her.

Kirsch looks at her Bunnie keychain as she dies.

Kirsch in the bottom left.
Add a photo to this gallery
Retrieved from "https://xenosaga.fandom.com/wiki/Kirsch?oldid=49822"
Community content is available under CC-BY-SA unless otherwise noted.