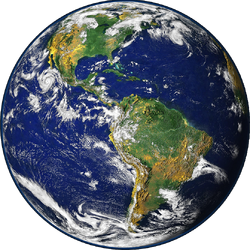 Lost Jerusalem, previously known as Earth until T.C. 0016, is the third planet from the Sun in the Sol System within the Milky Way galaxy. Although it is never called such, Lost Jerusalem can be thought as being First Jerusalem or Original Jerusalem.

Thousands of years before Xenosaga, a man named Jesus Christ was born on Lost Jerusalem, his life intertwining with the likes of Wilhelm, Yeshua (chaos), Mary Magdalene, and the Apostles. The actions and fates of these figures led to the creation of the words that made up the Lemegeton, the creation of Ormus, among other events.

In 20XX A.D., during the excavation operation of ancient ruins led by T. Masuda in the vicinity of Kenya's Lake Turkana, a giant gold object was discovered: the Zohar. Also found was Lemegeton and the Compass of Order and Chaos.

Afterwards, the Zohar was recovered by Vector Industries, and it was studied and analyzed at Vector's lab in Toronto, Ontario, Canada.

Theorizing that a source of enormous energy could be obtained by linking the Zohar to the mysterious wave-existence U-DO, a research team led by Chief Grimoire Verum began to search for a possible extraction method. Analyzing the excavated Word of God that Jesus and chaos/Yeshua left behind ages ago, Grimoire created the Zohar control program and named it Lemegeton, after the very words used to create it.

Later on, the Lemegeton program was used in an Zohar control experiment, in order to try to link a human being with the Zohar. Grimoire's daughter, Nephilim Verum, was used as the test subject. During the course of the experiment, however, she mysteriously vanished.

In spite of this, the Zohar control experiment was continued, and managed to successfully activate the Zohar and link it to U-DO. However, the energy contained within was too powerful for human technology to control, causing the same phenomenon that happened to Nephilim to happen on a larger scale, expanding to affect the entire planet.

The cause of this disappearance was what was called a 'Matter Shift'. When U-DO was linked to the Zohar, its interest and observation of consciousnesses that wished for annihilation caused the Zohar to go berserk, causing a Local Matter Shift to break out. Due to that, existences that originally were perceived in the real-number domain had shifted to the imaginary-number domain, and could no longer be perceived.[1][2]

The Immigrant Fleet were the only ones who could escape Earth before it vanished. A spaceship named Pleroma was used as an immigration ship, and an asteroid base was named after it. The Immigrant Fleet took records of Earth with them, such as culture, important art, books, the Bible, and even to the extent of a quote from Paul McCartney.

In the time of Xenosaga, Lost Jerusalem has been abandoned for about 4000 years, the way to it no longer known. Since the disappearance of Lost Jerusalem, the Galaxy Federation has moved its capital four times, eventually settling on Fifth Jerusalem. There have been dozens of attempts to discover the ancient human capital. In the Proto Merkabah superfacility, there is a holographic starmap; chaos comments on a large "uncharted" hole where Lost Jerusalem was supposedly located.

Rennes-le-Château, a floating landmass, is actually part of Lost Jerusalem, which has been separated from it.

Shion Uzuki, who previously had visions and dreams of being on Lost Jerusalem, goes on a journey to find Lost Jerusalem with Jr. and Allen Ridgeley via the Elsa, since chaos told her that while the universe was saved, "at best, this universe will last another few tens of thousands of years before it perishes." He also told her that the key to saving all lies in the land of origin, Lost Jerusalem. chaos, the Gnosis and the wills of countless people will all return there. At the end of Episode III, after the credits, KOS-MOS' body is seen drifting towards the planet. This is where the Xenosaga series comes to a closure.

A version of Lost Jerusalem also exists in the Xenogears universe. Although it is not explained why, Earth became an "inviolable region" (forbidden place) and is re-named "Lost Jerusalem." It is implied that Deus of the "Yahweh interplanetary invasion system" originated from Lost Jerusalem.

During the intro, one of the operators of the Eldridge mentions that Deus is targeting the "main planet". Perfect Works directly states that this refers to Lost Jerusalem, to Earth.

Its name is a reference to Jerusalem.

Geographical map with no man-made borders or countries Edit

Nephilim on the planet.
Add a photo to this gallery

Jesus, Mary Magdalene and Yeshua in a flashback.
Add a photo to this gallery
Retrieved from "https://xenosaga.fandom.com/wiki/Lost_Jerusalem?oldid=51274"
Community content is available under CC-BY-SA unless otherwise noted.