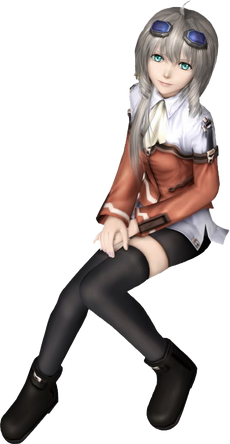 Mai Magus is a character in Xenosaga Episode III: Also sprach Zarathustra. 15 years prior to Episode III, she lived with her grandfather, Aizen Magus, in the Dabrye Mine on Miltia.

Mai is portrayed as fearless and reckless. She is also stubborn and aggressive, which Jr. replies of a certain someone he knows, possibly referring to Shion's personality. Stated by Jr., Mai is prideful as seen when she refuses to have Shion comfort her.

Her parents died when she was a child. Her father Tethlla Magus died protesting the U-TIC Organization; Tethlla was captured by U-TIC and used as a connection experiment test subject at Labyrinthos, where he lost his life. It is unlikely Mai knew this truth. Regardless, Mai holds a vendetta against U-TIC.

After losing her father in the Dabrye Mine rebellion, she customized his favorite Auto-Tech Leupold for use in battle and gave it the ability to equip firearms. With Leopold, Mai protects the peace of the Dabrye Mine.

According to the database, Mai believes in her heart that her father is still alive. Aizen comments that Mai believes her father's "soul" lives on in Leupold.

Mai attacks Shion Uzuki's party as they pass through the mines in search of the Elsa. In battle, she uses Leupold.

After losing, she requests they kill her, which they refuse. She then tells them to go away.

If the player finds information on her father in the Acute Neurosis Treatment Facility, they can tell Mai. She is grateful for knowing the truth and gives the player a Decoder 15. The Segment Address for this in Labyrinthos where the player can find a sword for Jin Uzuki.

Mai blocking Jr. from entering the mine.

"I won't ever forgive you."

"I won't ever forgive you."

Mai being flipped by Shion.

Mai being choked by Ziggy.

Mai wielding a weapon.
Add a photo to this gallery
Retrieved from "https://xenosaga.fandom.com/wiki/Mai_Magus?oldid=49024"
Community content is available under CC-BY-SA unless otherwise noted.