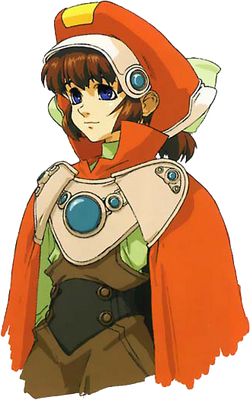 Marguerite "Margie" Fatima is Bart's first cousin and the reigning Holy Mother of Nisan, like Sophia once was.

Her parents, Elvira Fatima and Francis Revane, Holy Mother and Bishop respectively, were murdered in 9987 in Shakhan's quest for the Fatima Jasper. During the coup, Margie and Bart were both imprisoned and interrogated by Shakhan, but displayed amazingly strong wills for children, never giving in to him. Maison and Sigurd Harcourt saved both of them and took them away from Aveh.

Margie was forced to take her mother's place at the tender age of ten and she returned to Nisan. Although she acts childish, she is a brave and responsible girl who fits the office of Holy Mother very well, even at such a young age.

Not long before Xenogears, Margie leaves Nisan again later and goes to Bledavik, Aveh, based on false information. In the shopping center of the town, Margie saw Chu-Chu disguised as a stuffed animal. Margie wanted Chu-Chu so much that she took Chu-Chu with her, but unfortunately, along the way, Margie was slowed down by Chu-Chu's weight and caught by a subordinate of Shakhan. Shakhan recaptured her.

During the game, Margie is rescued from Shakhan who wanted Margie's Fatima Jasper.

After the events of the game, Bart and Margie have an arranged marriage... despite the fact that they are cousins. They are also the last living descendants of the Fatima lineage.

Portrait sketch.
Add a photo to this gallery
Retrieved from "https://xenosaga.fandom.com/wiki/Marguerite_Fatima?oldid=51025"
Community content is available under CC-BY-SA unless otherwise noted.