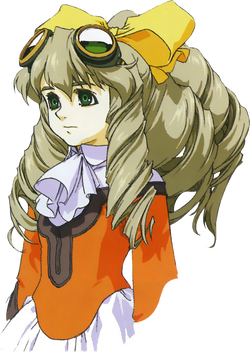 Maria Balthasar is the young daughter of Gear designer Nikolai Balthasar and the great-granddaughter of "Ol' man Bal" Isaac Balthasar. She is a playable character in Xenogears.

Maria was born in Shevat in the year 9986 to her father Nikolai and mother Claudia Balthasar.

When Maria was a baby, she was captured by Solaris along with her parents. Maria was held hostage as incentive for Nikolai to construct a next-generation series of Wel-Gear hybrids.

When the first model Seibzehn was created, he secretly programmed it to escape from Solaris and take Maria with it to the surface. However, in order to do this, Maria's mother Claudia sacrificed her life. Maria was taken in by her great-grandfather Isaac Balthasar.

Ever since then, Maria and Seibzehn had been standing guard in Shevat and defending the aerial nation from anyone who would try an attack or approach it.

Maria is first encountered on the top of Babel Tower in Seibzehn, fighting Fei Fong Wong and his allies for infiltrating "Shevat's territory" (ironically, Fei himself was born in Shevat.) After being defeated, under the commands of Queen Zephyr, Maria brings Fei's group to Shevat, where she shows them around.

Later, Maria's father Nikolai returns to Shevat in Achtzehn. Maria defeats him and makes peace with his death.

After this, Maria tags with Fei's group, wanting to get revenge on Solaris for killing her parents, which she succeeds in when it crashes and sinks into the ocean.

Her role after this is extremely minimal, however. In Disc 2, she only has a mere 8 lines of mandatory dialog, showing her irrelevance to the main plot. However, she still joins in the mission to defeat Deus.

In battle, Maria herself is not a very strong character, since she is incapable of performing Deathblows which she was shown using weak punches and her magical ability. Her only saving grace is the fact that she can remotely call in Seibzehn to perform some powerful special attacks as her Control magic.

In Gear battles, however, she's much different. Seibzehn is a powerful Gear in combat, with attacks and special abilities that rivals the Xenogears. One of its basic attacks that can do both rocket fists in each of its fists and can shoot multiple missiles as one of its deathblows. Seibzehn also focuses on more close range attacks. The final deathblow Maria Beat which Maria heavily knocks the Gear's head while wielding a giant red hammer or a mallet as her personal weapon and it was her first strike on gigantic opponent such as Gears instead of her battles on the ground.

Portrait sketch.
Add a photo to this gallery
Retrieved from "https://xenosaga.fandom.com/wiki/Maria_Balthasar?oldid=51028"
Community content is available under CC-BY-SA unless otherwise noted.