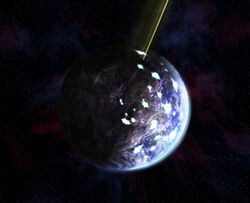 Michtam, previously known as Abraxas until T.C. 4667, is a destroyed planetary member of the Galaxy Federation. It was the fourth planet in the Michtam star system.

Several figures in the series call the planet the "birthplace" of Ormus, however, it is likely this is a lie propagated by Wilhelm as Ormus apparently existed before the death of Jesus Christ on Lost Jerusalem. It is probably more of a "continuation" of Ormus than its actual "birthplace".

It is the first planet settled by the people of the Immigrant Fleet after they left Lost Jerusalem. After the appearance of the main Immigrant Fleet, the sovereignty of the planet was essentially transferred to the Immigrant Fleet nation, and the planet came to be commonly called Abraxas. It became the place where "God's relics" were kept, primarily the Zohar, Zarathustra device and Proto Ω.

At the start of the T.C. 4000s, the Immigrant Fleet reunited with another fleet that had escaped from Earth--a group that had already formed a united organization of nations in the form of the Galaxy Federation. The two groups began mutual exchanges, but their backgrounds and cultural disparities were too much to bridge. Most importantly of all, the Immigrant Fleet was in possession of the Zohar. This led to a history of wars and truces that has repeated itself countless times.

The planet-state's population is said to have been over 2.3 billion by the T.C. 4300s; even after joining the Federation, records show that 67% of its population remained purely descended from citizens of the Immigrant Fleet.

In the T.C. 4500s, the Immigrant Fleet appears in the Michtam star system and claimed sovereignty over planet Abraxas, their "holy land". A protracted conflict between the two groups started in the Michtam system not long after.

In the T.C. 4600s, the territorial rights of Abraxas went to the Immigrant Fleet.

However, when the moderate Julius XVIII was installed as the Immigrant Fleet's Patriarch, the Immigrant Fleet began to accept the solution of a divide-and-rule system for Abraxas. Even though the difference in their tactical prowess means the Galaxy Federation should have a formidable advantage, Federation leaders know that pressure has not gotten them far with the Immigrant Fleet, and they are recommending this alternative as well. A movement to convert the planet Abraxas over to a full divide-and-rule system was first seen at the Pilgrimage Meeting in T.C. 4667.

Abraxas is the setting of Xenosaga: Pied Piper in T.C. 4667, which stars Federation counterterrorist Jan Sauer (Ziggy), in the city of Archon. During the game, after Voyager's attack on the Pilgrimage Meeting in the Archon Cathedral, the planet is put on heavy surveillance by the Federation, fearing that the Zohar would go out of control again. This led to Abraxas's sovereignty falling out of balance; eventually, all domain rights were transferred to the Galaxy Federation. The planet became recognized as a planet-state under Federation law; and at the same time, an official declaration decreed that its official name was now Michtam, taken from the star system.

Margulis, Pellegri and Joachim Mizrahi are from here, in the 4700s.

The planet was obliterated by the Gnosis in T.C. 4747 due to the Galaxy Federation's failed Zohar control experiment. Kevin Winnicot was the sole survivor from Michtam; unfortunately, his mother perished.

After the destruction of planet Michtam, the Zohar research facilities were moved to Miltia, due to the existence of numerous facilities left on Miltia from early Immigrant Fleet visits.

In Episode I, Juli Mizrahi mentions to Ziggy just before he leaves to rescue MOMO Mizrahi from the U-TIC Organization that the S.O.C.E.. was performing an experiment between Second Miltia and Michtam that was "vital to the future of the human race," and tied to the Zohar Project.

In Episode III, Michtam space becomes the site of a full scale war between the Gnosis, the Federation and the Immigrant Fleet/Ormus. Michtam serves as the location for the last quarter of the game where the stories most of the series' cast (over 15 different characters) are resolved.

Abraxas was a word of mystic meaning in the system of the Gnostic Basilides, being there applied to the "Great Archon" (each Archon being a servant of the Demiurge, the figure responsable for fashioning and mantaining the physical universe), the first of the 365 spheres. The seven letters spelling its name may represent each of the seven classic planets—Sun, Moon, Mercury, Venus, Mars, Jupiter, and Saturn.

Michtam is a Biblical reference.

Wilhelm and Zarathustra.
Add a photo to this gallery
Retrieved from "https://xenosaga.fandom.com/wiki/Michtam?oldid=50775"
Community content is available under CC-BY-SA unless otherwise noted.