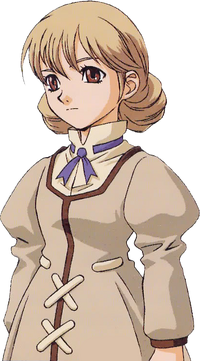 Midori Uzuki is the only child of Citan and Yui Uzuki and Gaspar Uzuki's granddaughter.

She is a very quiet young girl and doesn't actually speak a word of dialogue until near the end of Disc 1. Citan comments that she won't even call out to her own father. She appears to have some kind of empathic extrasensory abilities that allow her to tell what people are thinking just by being in their presence, so much so that she could somehow sense that underneath the monstrous Id, Fei Fong Wong was still "in there."

If the player returns her ring, found at Citan's House, on disc 2, she will reward the player with the valuable "Hercules Ring" in return. This is not completely missable as Citan's House is still accessible even after the cataclysm.

Midori is the only character in Xenogears to seemingly possess psychic powers rather than Ether-based magic. Specifically, she is able to sense what people nearby are thinking no matter their mental defenses. She has no trouble sensing Fei through Id, and gets along well with Primera Black for what limited screentime they share as a result of being able to sense what the girl is thinking without her needing to talk.

This power, and its source, are not explored in the game.

Perfect Works claims that Midori was able to sense even Citan's connection to Emperor Cain and the Gazel Ministry, and this distanced her from him. It also states that this power works on animals, not just people.

Retrieved from "https://xenosaga.fandom.com/wiki/Midori_Uzuki?oldid=56163"
Community content is available under CC-BY-SA unless otherwise noted.