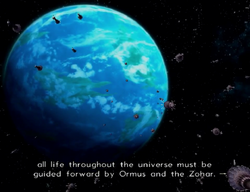 Miltia, also known as Old Miltia to help differentiate it from Second Miltia, is a lost planet by the time of Episode I. Miltia is a ruined wasteland which is eventually destroyed in Episode II.

Similar to Michtam (Abraxas), Miltia was lost in a power struggle between the Galaxy Federation and the U-TIC Organization/Immigrant Fleet/Ormus.

Its capital was Dasgupta which is the main city seen throughout the series.

Miltia was one of the autonomous worlds occupied by the people of the Immigrant Fleet.

Miltia held the Zohar in Labyrinthos, the headquarters of the U-TIC Organization. Next to Labyrinthos was the Song of Nephilim.

Miltia is the birth planet of Joachim Mizrahi and Mary Godwin. It was also the homeworld of the Uzuki family (Shion Uzuki and Jin Uzuki) before the Miltian Conflict forced them to relocate to Second Miltia.

In the year T.C. 4753, Miltia became the site and battleground of the Miltian Conflict. Miltia was lost in the Abyss at the end of the war, and the U.M.N. gate for Miltia is sealed in the Abyss.

Miltia is visited in the Encephalon.

The Y-Data, which was entrusted to the 100-Series Observational Realian MOMO Mizrahi by Joachim Mizrahi, is used by Albedo Piazzolla to open the U.M.N. gate to Miltia. After the Y-Data was leaked, the path to Miltia was unlocked and the planet once again turned into a battlefield over the Original Zohar resting within Labyrinthos.

Shion and her team investigate Miltia. They go to Labyrinthos. After the link between Cecily and Cathe and the Zohar is destroyed, the Ω System awakens and destroys Miltia from the inside out.

Later, the Ω System is completely destroyed with the annihilation of Proto Ω, which leaves the Original Zohar as the only remaining piece of Miltia. That, in turn, is sucked up by Abel's Ark.

For a good chunk of the game, Miltia is mysteriously visited in another timeline, making Shion's group wonder if they time traveled 15 years in the past.

However, it is revealed that this Miltia isn't Miltia 15 years in the past, but rather, part of Shion's subconscious.

The Miltian solar system was one unified nation governed by the Miltian republic. It was comprised of the capital planet, Miltia (the fifth planet in the system), and an artificial city orbiting the system's companion star (Miltia is a binary star system).

The Miltia system itself belongs to the 4th Finger of the 18th Galactic Tantus Arm. Within the same arm, 10 parsecs (about 33 light years) away, was a system with a habitable planet that had just been terraformed. Immigration from the Miltia system to this new world was underway, and it later came to be known as Second Miltia.

Approximately 80 percent of the population of the Miltian Republic was composed of Immigrant Fleet descendants. Before it became a republic and a member of the Federation, the nation was an autonomous government. Upon joining the Galaxy Federation, a Federation-assigned parliament member took office as head of the Miltian government. But this situation, in which the planet was effectively under Federation control, led to discontent among the citizenry. This contributed to the difficulty of disbanding the former government and the military of the autonomous government (this military would later become the U-TIC Organization's main force).

After the destruction of planet Michtam, the Zohar research facilities were moved to Miltia, due to the existence of numerous facilities left on Miltia from early Immigrant Fleet visits. A senior researcher on the project at the time, Joachim Mizrahi, resided on Abraxas (Federation name: Michtam). Being of the People of Zohar himself, he established the U-TIC Organization in secret from the Federation government with the aid of the former government (Ormus), and proceeded with connection experiments involving the Zohar and its control system, U-DO (it is said parliamentary manipulation by then-chairman Wilhelm was behind the Federation overlooking the development of U-TIC). The Song of Nephilim was born as a byproduct of that research.

After that, Mizrahi and newly-assigned U-TIC research staff member, Juli Niwashiro, produced a child, Sakura. Due partly to Sakura's unusual illness, their married life did not last long. After they separated, Mizrahi devoted himself to Realian research in an effort to cure his daughter Sakura, who was living with Juli. There are signs that he actually used the former government to support this project.

An experiment at the Yuriev Institute resulted in the death of Joachim Mizrahi's daughter. Yuriev informed Joachim of this matter personally. Mizrahi's research objective now changed from treating Sakura to reviving her--the creation of a new Sakura.

Burying himself in even more extreme research, Joachim retreated underground, and, under the wing of the former government (Ormus), proceeded with the Zohar and Song connection experiments. With the achievement of a certain degree of success from the Zohar research (temporary activation via emulator unit and the completion of Proto Omega), the former government military, under the name of the U-TIC Organization, organized a coup d'état in support of Mizrahi.

It is said that behind Mizrahi's support lay not merely his position as a Zohar researcher, but his high status on Abraxas--in other words, his status inside of Ormus.

For some time, the Federation government had viewed the monopolization of the Zohar by the former government faction as dangerous and had been conducting their own internal investigation. They requested that the coup d'ètat government turn over Joachim to the Federation. At this same time, the Federation Special Operations force, under the command of Commander Helmer, was stationed on the planet Zavarov. It was there that Helmer became acquainted with Dmitri and Juli.

In addition, within that same force was the intelligence bureau's special missions unit, formerly headed by Colonel Margulis. Captain Jin Uzuki had once been assigned to it, as well (at this point in time, Margulis and Pellegri had already disappeared from the military).

Eventually, due to the Miltian Republic's refusal to turn over Joachim, the Galaxy Fedration declared war. The Special Operations force, together with the Marine Corps' land operations division, began descent operations on the planet Miltia. Contact was lost with the first and second descent operation forces, and the were presumed eliminated (by the outbreak of Realian violence and the mobile weapon force containing Proto Omega as well as the Zohar defense system). Lieutenant Virgil was one of the soldiers who participated in this second descent operation.

Additionally, one of the causes of the descent operation failures is thought to have been that units which had been under Colonel Margulis's influence were in communication with the Republic government (Ormus). The leaking of Ormus secrets by Suou Uzuki also took place during this time.

Several weeks after the second descent operation, the third operation began, and the U.R.T.V. soldiers began their infiltration.

The operation ended with the activation of the Zohar, the appearance of the Gnosis, and the sealing away of the region of space around the planet Miltia.

At this time, at Juli's suggestion, Proto Merkabah was sealed into the depths of the abyss--but that is merely what the records show. The truth would be hidden by Ormus-affiliated Parliament members and members of the military.

With the destruction of Miltia, the U-TIC Organization effectively perished. To Ormus, that meant nothing more than that they had lost one of their scapegoats; however, due to a need to continue manipulating the Federation government, U-TIC was not entirely erased. It was reformed by Margulis and went into a long period of dormancy.

The citizens who evacuated the planet Miltia emigrated to Second Miltia, and in place of the defeated Miltian Republic was born the Miltian Autonomous State. Lieutenant General Helmer of the Federation military became Miltia's parliamentary representative, and with that, Helmer retired from Military service.

Dmitri had died during the Miltian Conflict, but the post-war proceedings were largely directed by the Salvator faction, and the Kukai Foundation was established as an enforcement organization. While feeling a need to defend against Ormus, Helmer nevertheless wanted to keep his distance from the Salvator and kept his link to Gaignun Kukai a secret.

Learning from the failures of the Republic, Ormus assigned all of their illegal activities to the U-TIC Organization and concentrated on legal activities (manipulating the Parliament), centered around Sergius.

Miltia may be wordplay of the word "militia" (minus an i), which means "military force". This could be a reference to the fact that Miltia was destroyed in a military struggle, and to the events of the war of the Miltian Conflict.

Labyrinthos in the distance.

Labyrinthos in the distance.

Shion on a swing in Miltia's park, waiting for her dad.

A statue, possibly Mary, in Febronia's church.
Add a photo to this gallery

U.R.T.V.s killing civilians in the Encephalon resembling Miltia in Episode I.

E.S. Asher in the Miltian Conflict in Episode II.

Labyrinthos during the Miltian Conflict.

Miltia during the Miltian Conflict.

Urban A District during the Miltian Conflict.

The Song of Nephilim activates.

Gnosis arrive.
Add a photo to this gallery

Shion in Old Miltia's ruins 14 years after the Miltian Conflict.

Miltia explodes as it transforms into the Ω System.

Miltia explodes as it transforms into the Ω System.
Add a photo to this gallery
Retrieved from "https://xenosaga.fandom.com/wiki/Miltia?oldid=49753"
Community content is available under CC-BY-SA unless otherwise noted.