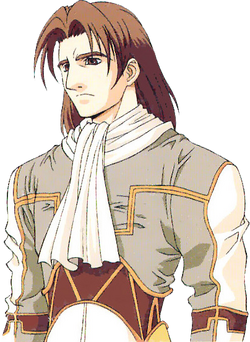 Nikolai Balthasar is a brilliant scientist who was kidnapped and captured from Shevat and forced to live and work in Solaris.

Nikolai is the father of Maria and husband of the late Claudia, thus Nikolai is a widower. Isaac Balthasar is his grandfather.

In 9986, not long after Maria's birth, Nikolai was captured by Solaris, due to being an expert in neurological research, for Solaris' M Plan. Solaris' scientists put much effort into the research to create evolved Gears. Regardless of how great a pilot is, as long as it is human, there will always exist a time lag and human error when interfacing with a machine. Nikolai, a genius in the field of cranial nerve mechanisms, was ordered to search for a way for humans to go beyond humans - by merging humans and machines. However, he refused to work.

In 9987, Claudia and Maria were also kidnapped from Shevat and taken to Solaris. With their lives on the line, Nikolai was forced to work on the M Plan, while Claudia and Maria's lives were held hostage as incentive. He often experimented with Gears and humans in the Soylent System with Erich Van Houten. Nikolai succeeded in fusing man and machine.

In 9990, Claudia died due to experimenting with the creation of the Gear Seibzehn. Nikolai was devastated. After, Nikolai programmed Seibzehn to return Maria to the surface to Isaac Balthasar.

Over the years, Nikolai became gradually brainwashed by Solaris. He began to become misanthropic, believing humans are imperfect foolish life forms, and that technology is the way to humanity's salvation.

Eventually, he created a Gear (Achtzehn) that could easily merge with human thought, which practically destroyed his existence.

He comes back to Shevat when Maria and Chu-Chu attack his Gear. He fights and loses to Chu-Chu. He makes peace with his daughter before killing himself.

Retrieved from "https://xenosaga.fandom.com/wiki/Nikolai_Balthasar?oldid=50440"
Community content is available under CC-BY-SA unless otherwise noted.