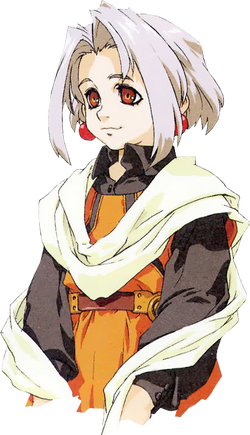 Primera was born to Jesiah and Primera Blanche, only a couple years after they escaped Solaris and moved to the Aquvy area.

She stopped talking after she and her older brother Billy witnessed their mother's brutal murder at the hands of the Reapers, or Wels. Influenced by her trauma, Billy took it upon himself to start up an orphanage so as to not have any more children end up like her. Given to her reclusive behavior towards Stone, it's likely that she'd known about the death of her mother being contrived by him.

Unlike Billy, she was warm towards their estranged father, Jessie Black, despite his 4 years absence, despite Billy's discomfort.

Elly and Bart rescue her from sex traffickers onboard the Thames. With this, they're able to gain a favor from Billy's connections in the Ethos to help remedy Fei's critical injuries at the hands of Kahran Ramsus.

She is selectively mute until Bishop Stone is killed. She finally starts talking again after witnessing the heroics of her father, Jessie Black, and her brother as they defeat Bishop Stone. Though she calls out to her father, she wouldn't say Billy's name, much to his visible angst.

She joins the crew of the Yggdrasil and settles in with Marguerite "Margie" Fatima and Chu-Chu. She will provide written information for the player about how to manage the use of Billy's guns while he's outside the party, and give Billy supportive words while he's in the party.

Retrieved from "https://xenosaga.fandom.com/wiki/Primera_Black?oldid=48225"
Community content is available under CC-BY-SA unless otherwise noted.